Once the weather cleared, I got back up onto the treehouse platform, took apart my "treehouse kit" and started raising the walls.

Fun fact: the playhouse kit's directions spent quite a bit of time making sure whoever was putting it together understood the importance of a solid, level foundation. A bed of gravel was suggested, as was concrete. Neither was going to work for me, so I knew I'd be fighting random bits of unevenness going forward -- building a treehouse is all about finding ways to work with the tree, rather than against it.

It was a bit of a trick standing the first two panels up (to make a corner) and screwing them together on my own — every slight gust of wind threatened to take a panel and toss it to the ground — but eventually I’d connected several of my pieces, and almost like magic a treehouse started to appear! 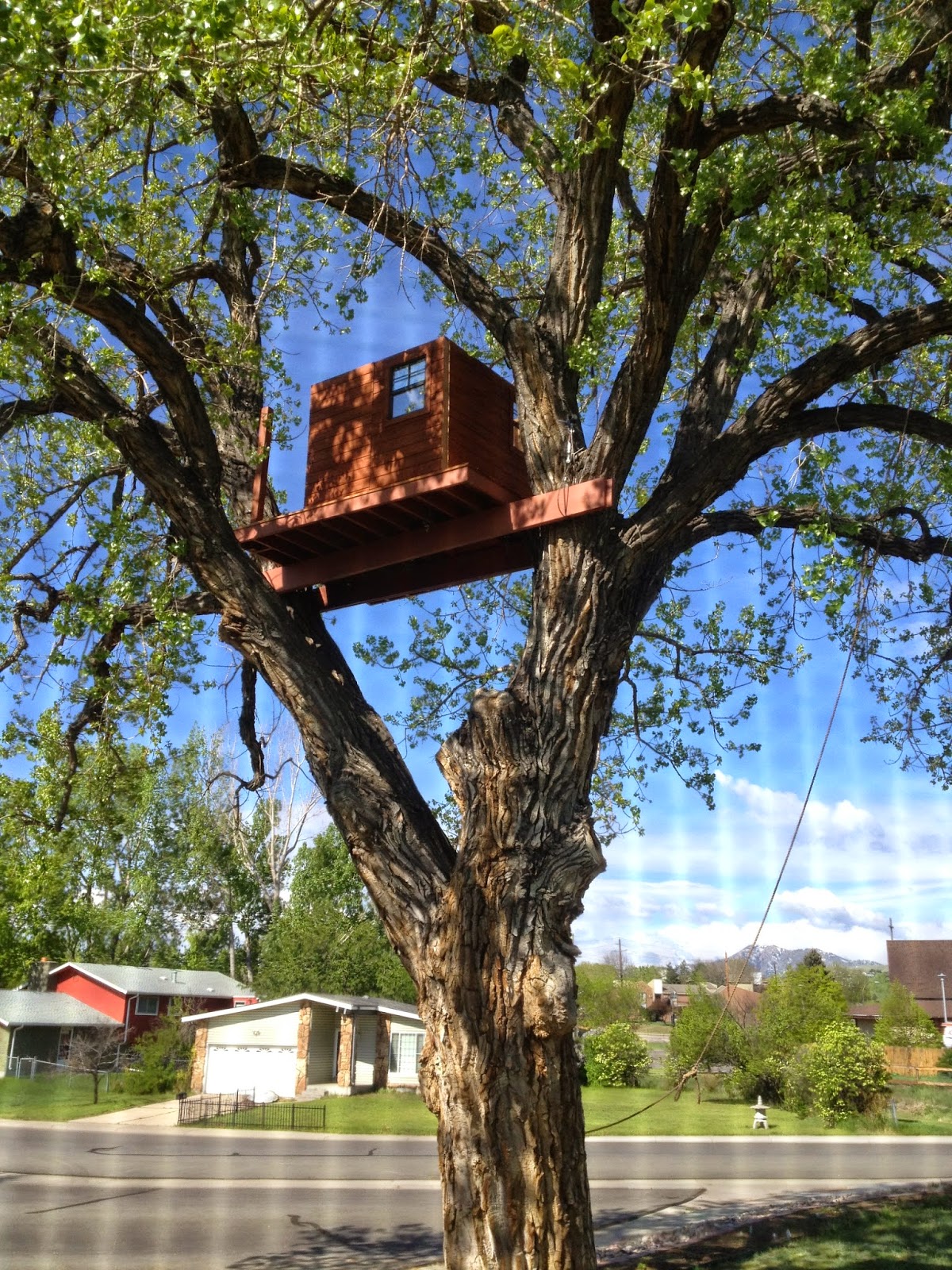 You can see how the 4x4 posts will create a little sheltered balcony of sorts on the south side of the treehouse.

A careful observer might notice one of my treehouse panels is upside down in this picture. I had to detach it and flip it the right way up. 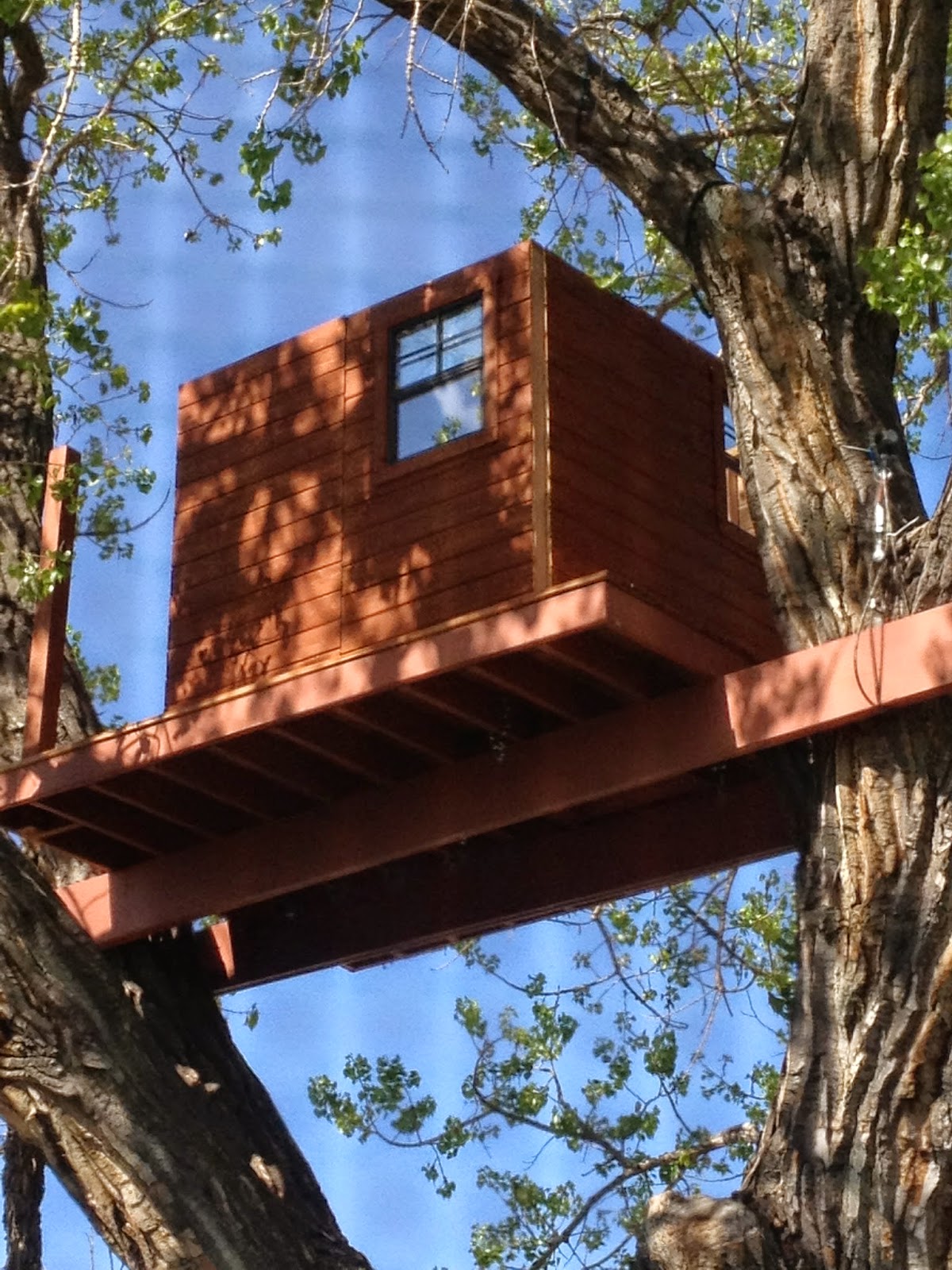 Oh for crying out loud.

On the inside, it was a matter of squaring things up and driving a lot of screws. 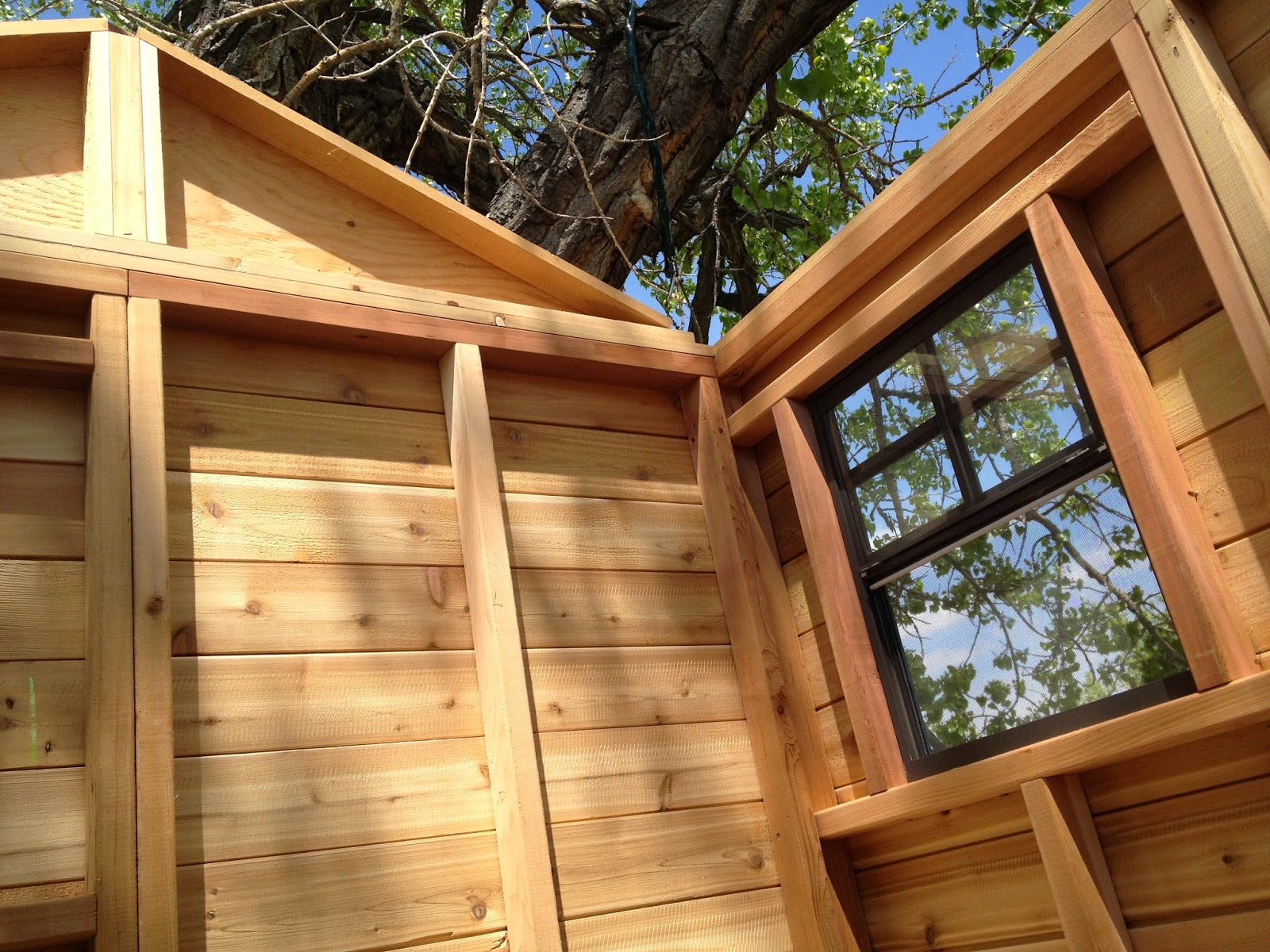 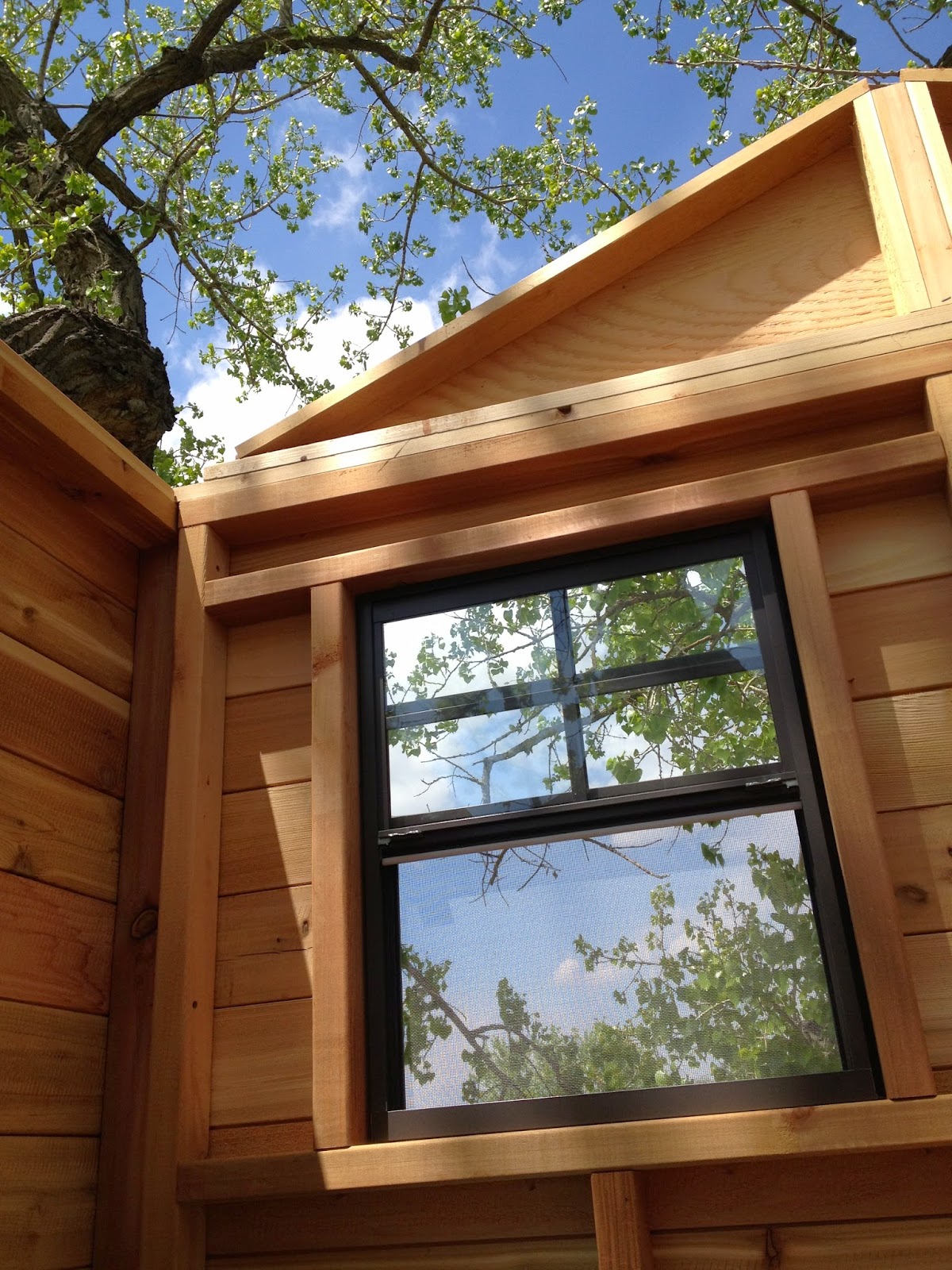 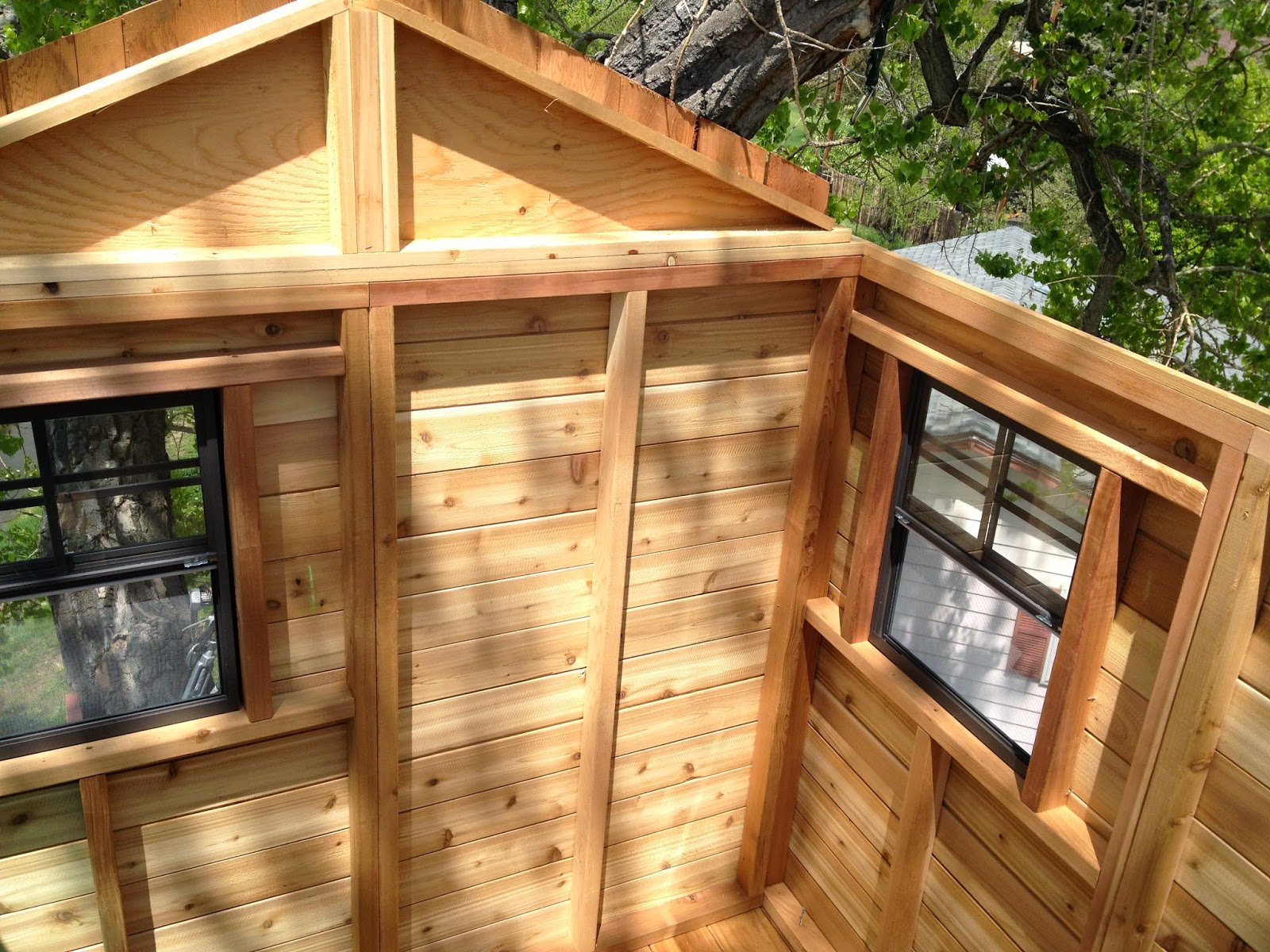 One thing about a treehouse with no roof (yet): great light.

The individual pieces of the deck railing details looked just fantastic; again the view was really something. 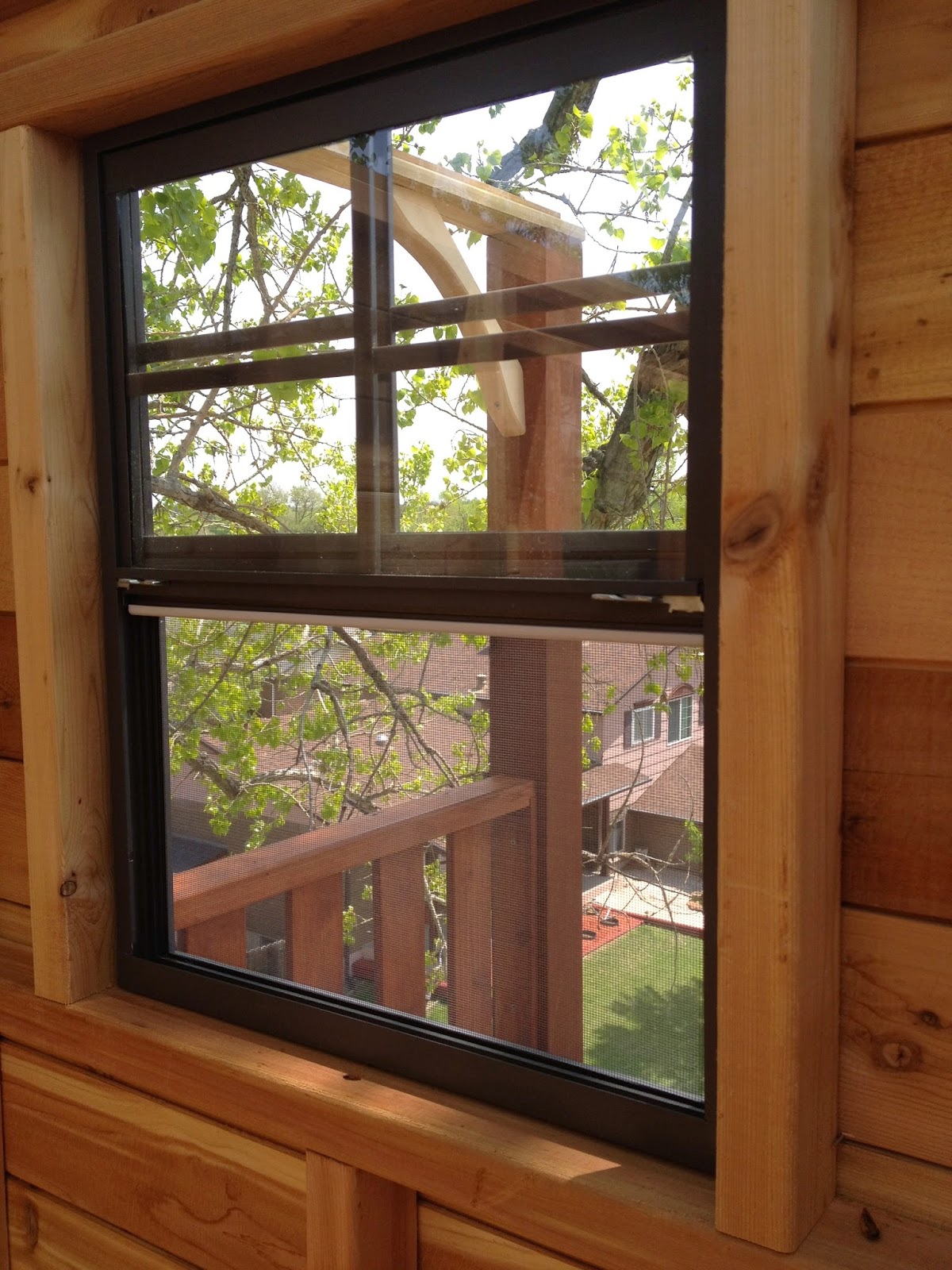 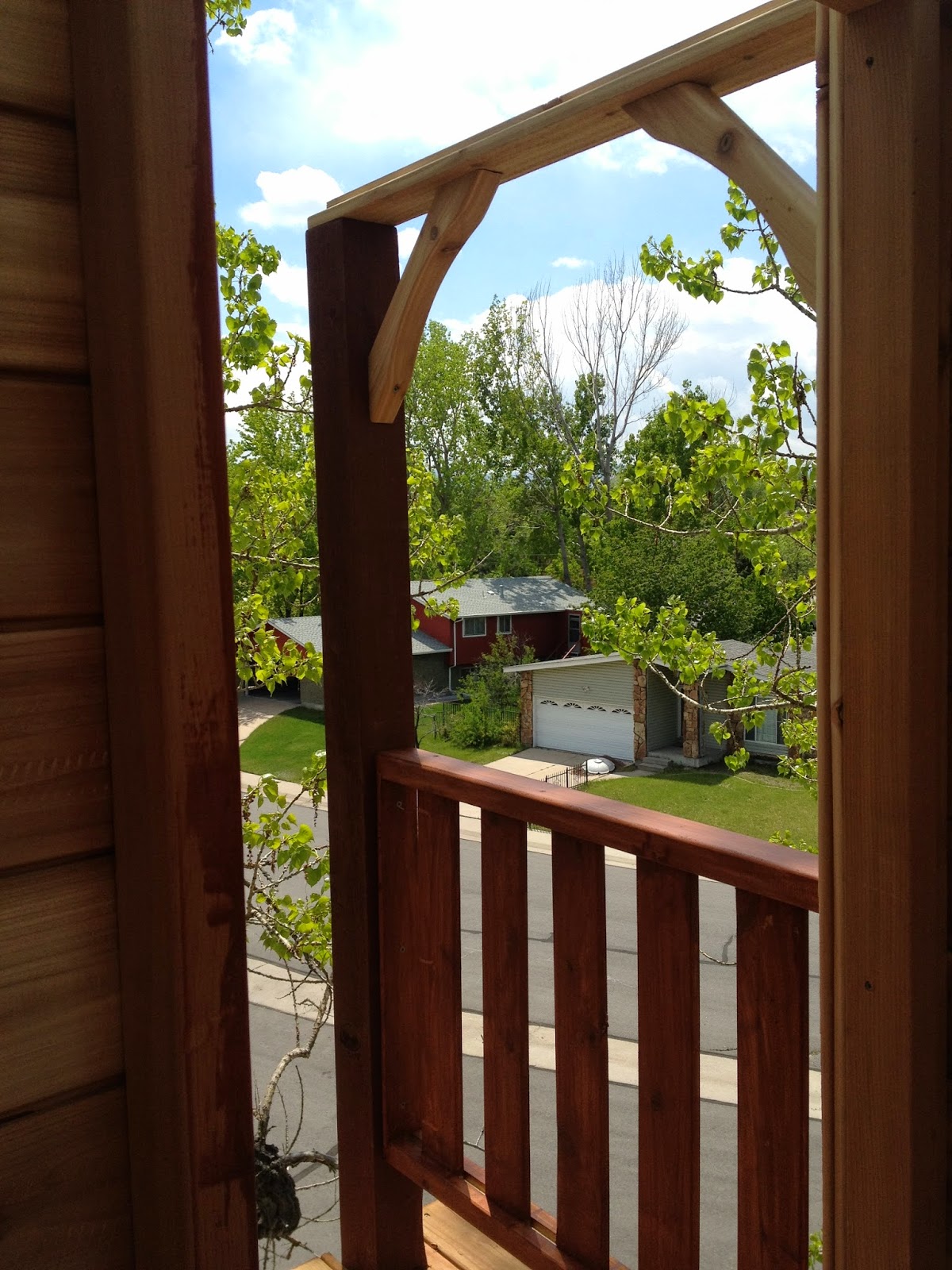 Getting the door to open and close correctly was a bit of a fiddly bit of work, but it came together. I also hauled up the roof truss assemblies and got them into place -- also fiddly. 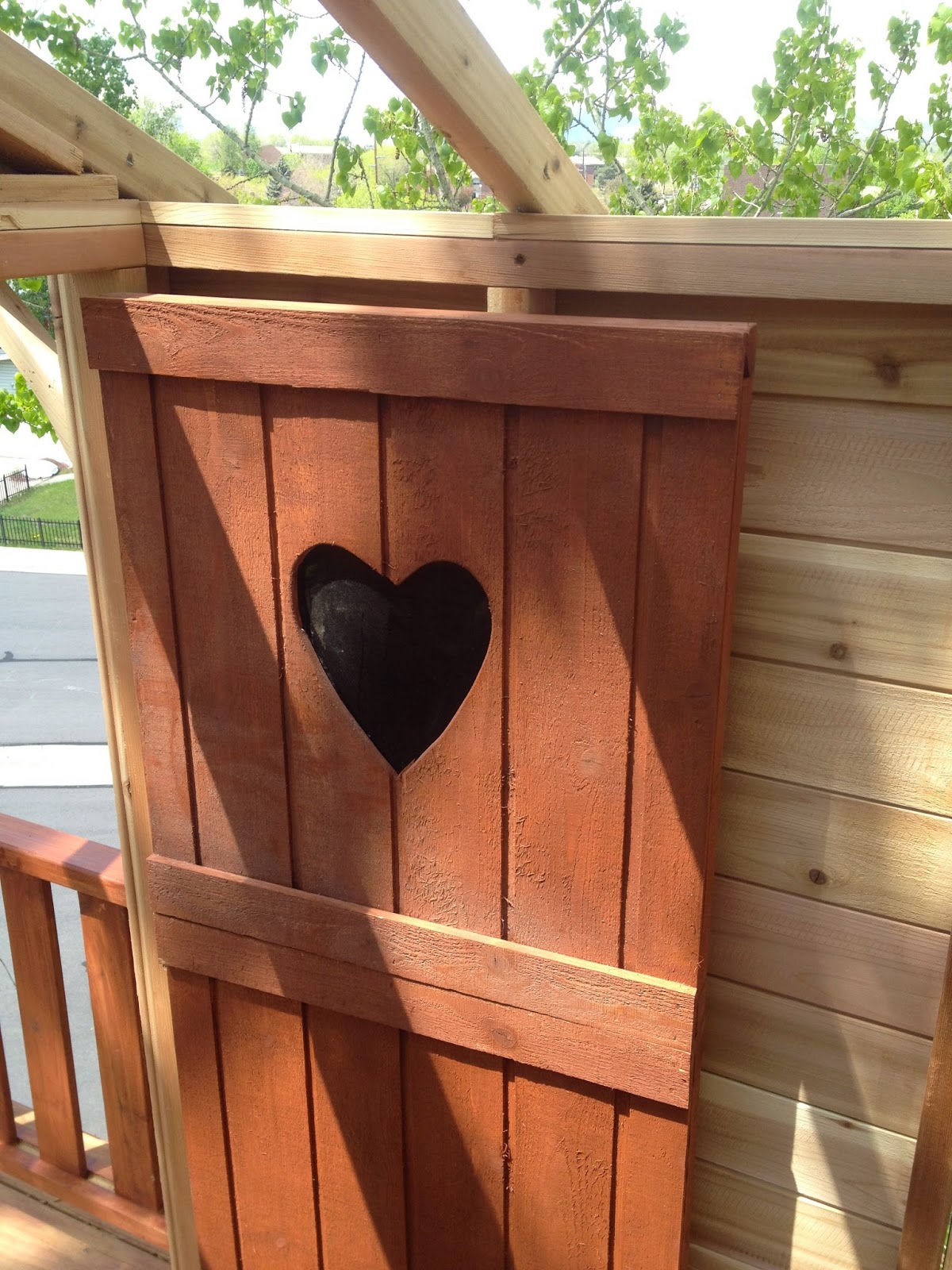 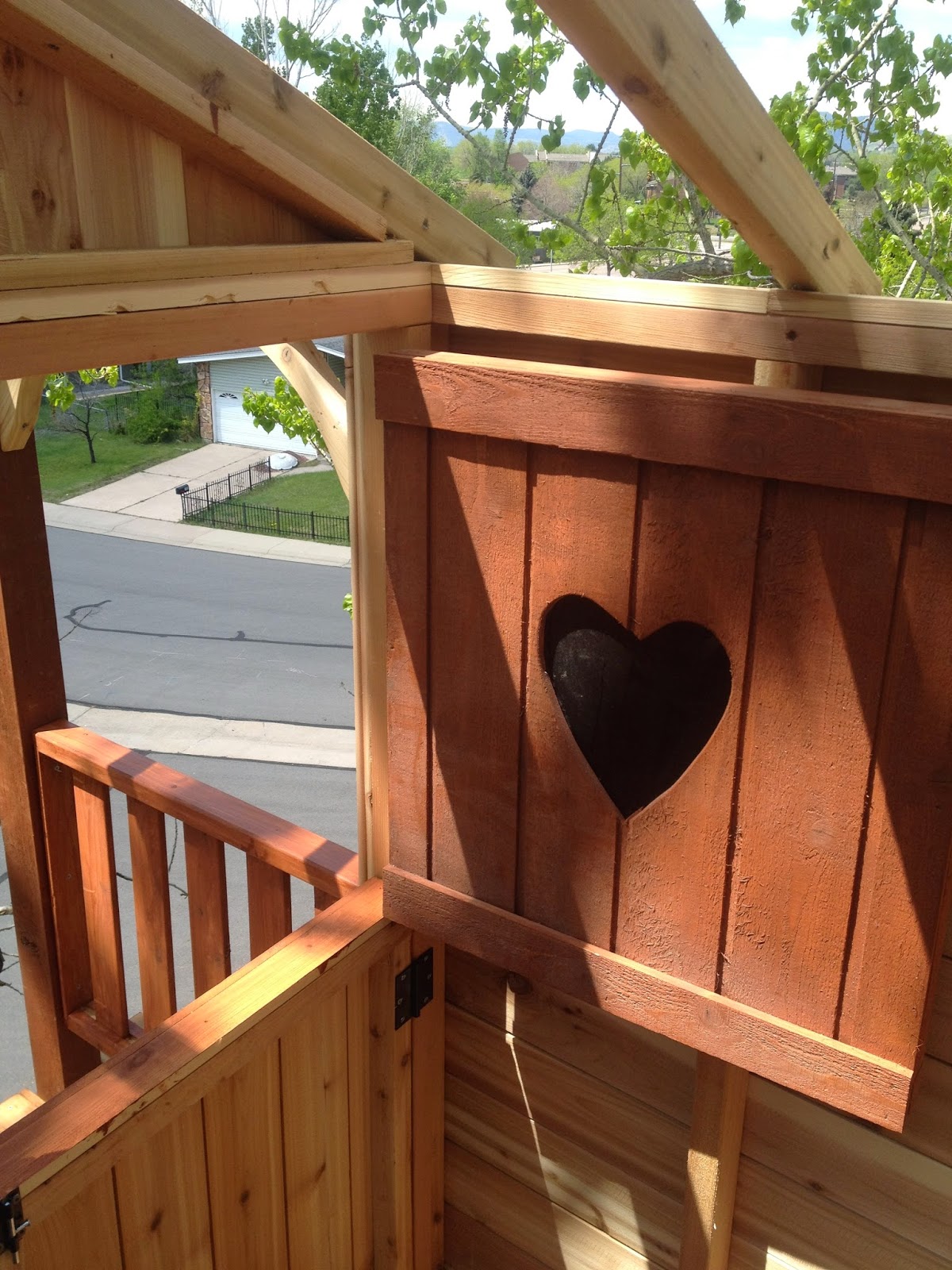 I thought it might be easier to accomplish things with the rope ladder in place, so I spent some time hauling up and securing the first section to the bottom of the treehouse. 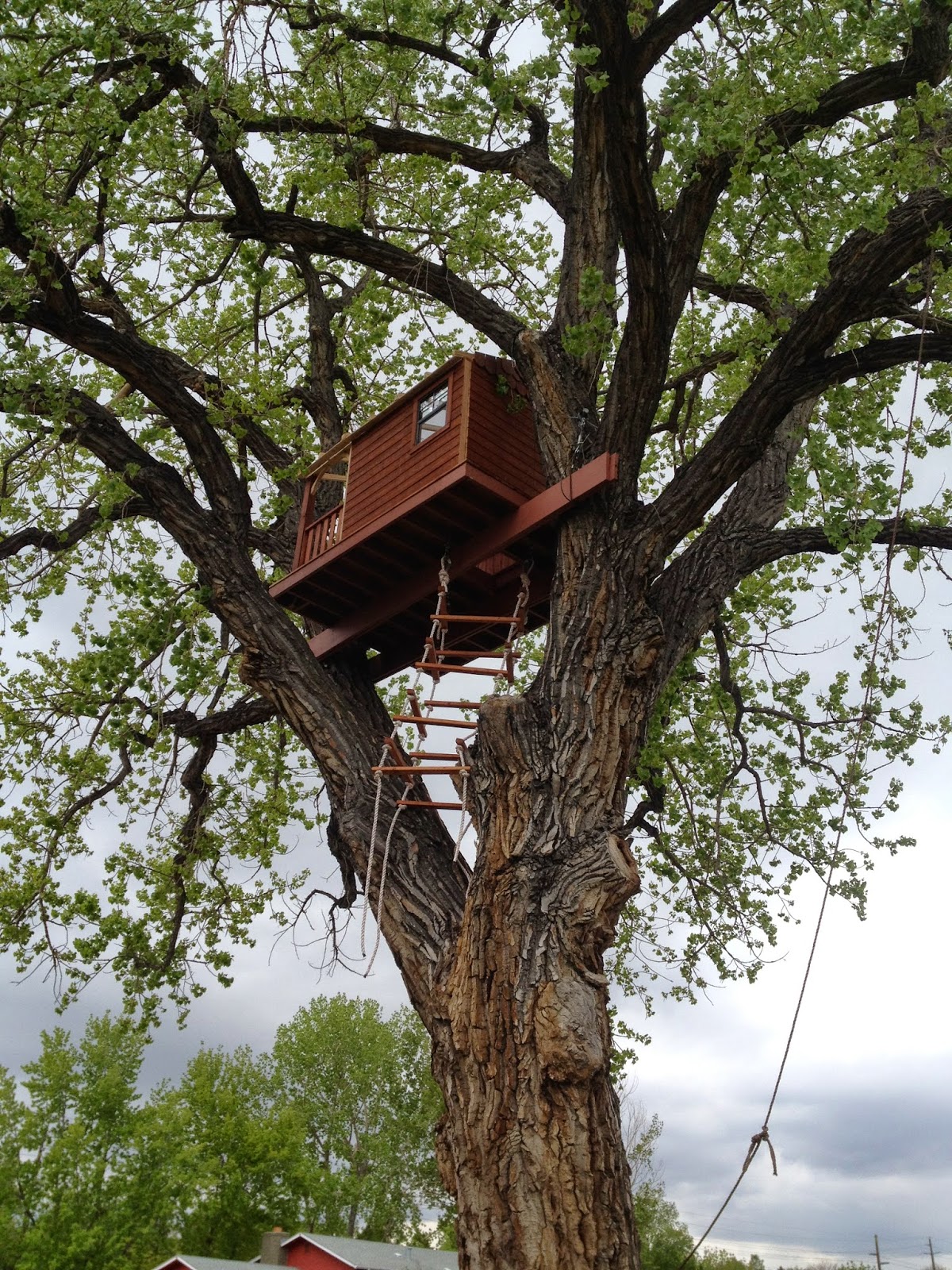 "Some time" = half a day. Heavy and cumbersome.

It became clear pretty quickly, however, that I wasn’t going to save any time using it while I was still going up and down with tools, panels, and random lumber. So I decided to wait on the rest of the treehouse ladder.

Here’s a good example of how I’d save a few trips up and down. You can see I have several roof panels tied on the rope, about 30 feet apart; I would get myself up there, and then haul up one section at a time without needing help from the ground. 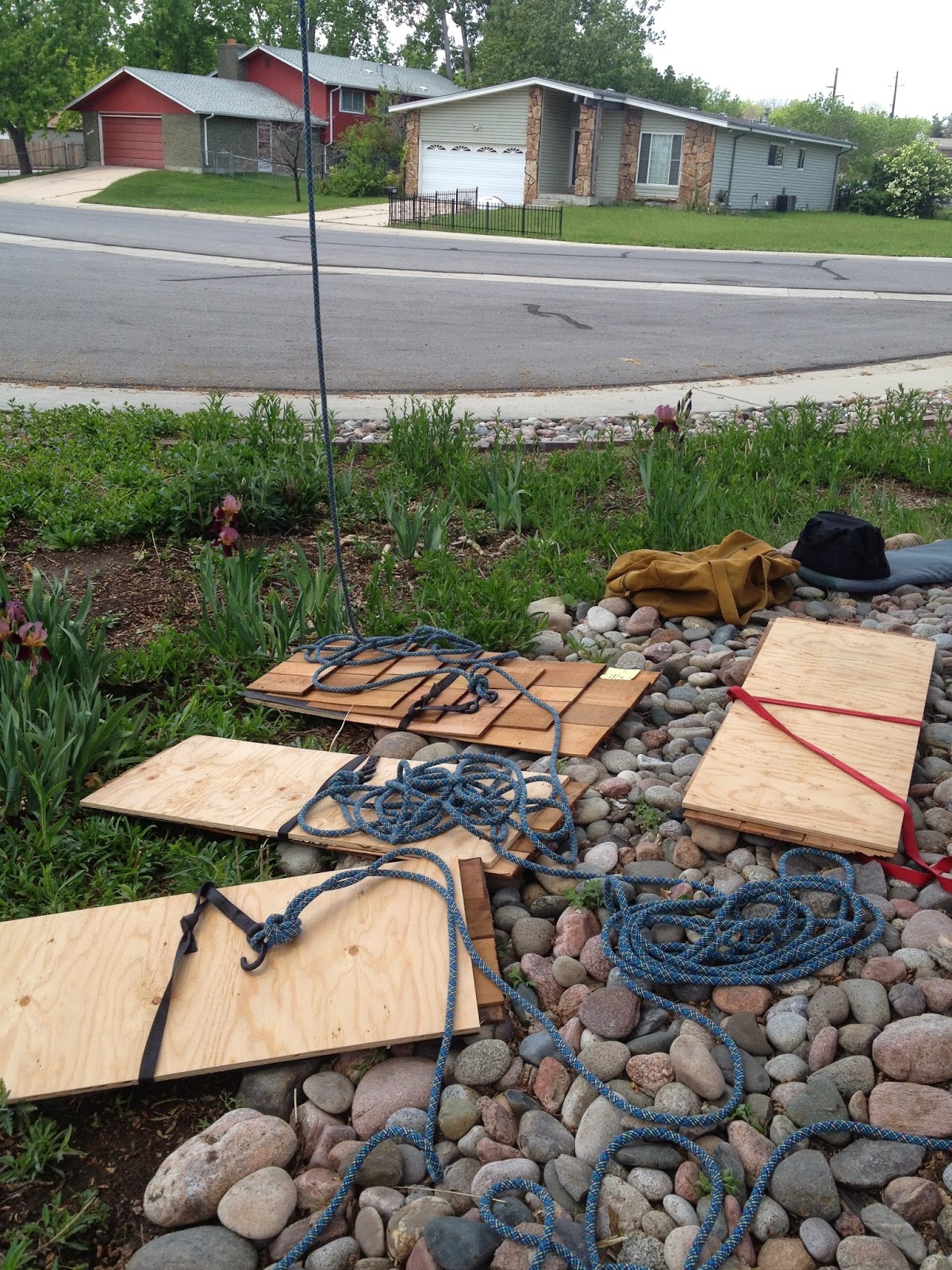 I used this method for everything -- lumber, tools, tool bags. Whatever I needed up there for the day. Or next little bit.

The roof sections were particularly tricky, because I wasn’t able to follow the basic instructions, e.g. standing outside the house and laying them in place that way. Each roof panel had to be lifted through the roof framing sideways, then laid down flat — where I’d hold it in place with one hand and put a few screws in with the other. I also discovered the roof panels were too large to fit between the trusses, so I had to pull off a few shingles and cut them all in half, then replace the shingles once they were in place.

That meant I had to build the treehouse roof from the back, so to speak, adding panel halfs, re-nailing shingles over those cuts, nailing down a top shingle or two, and moving on. 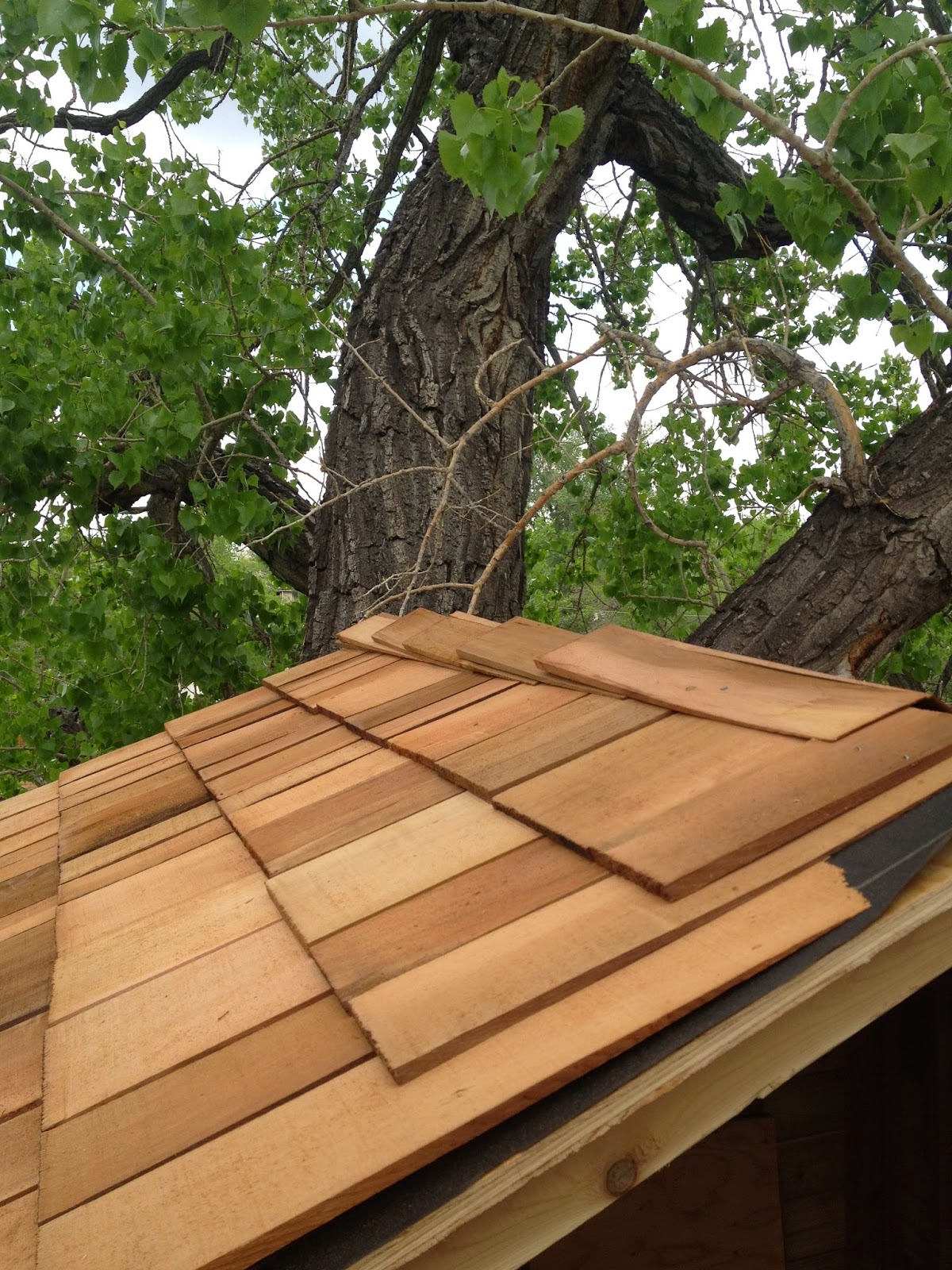 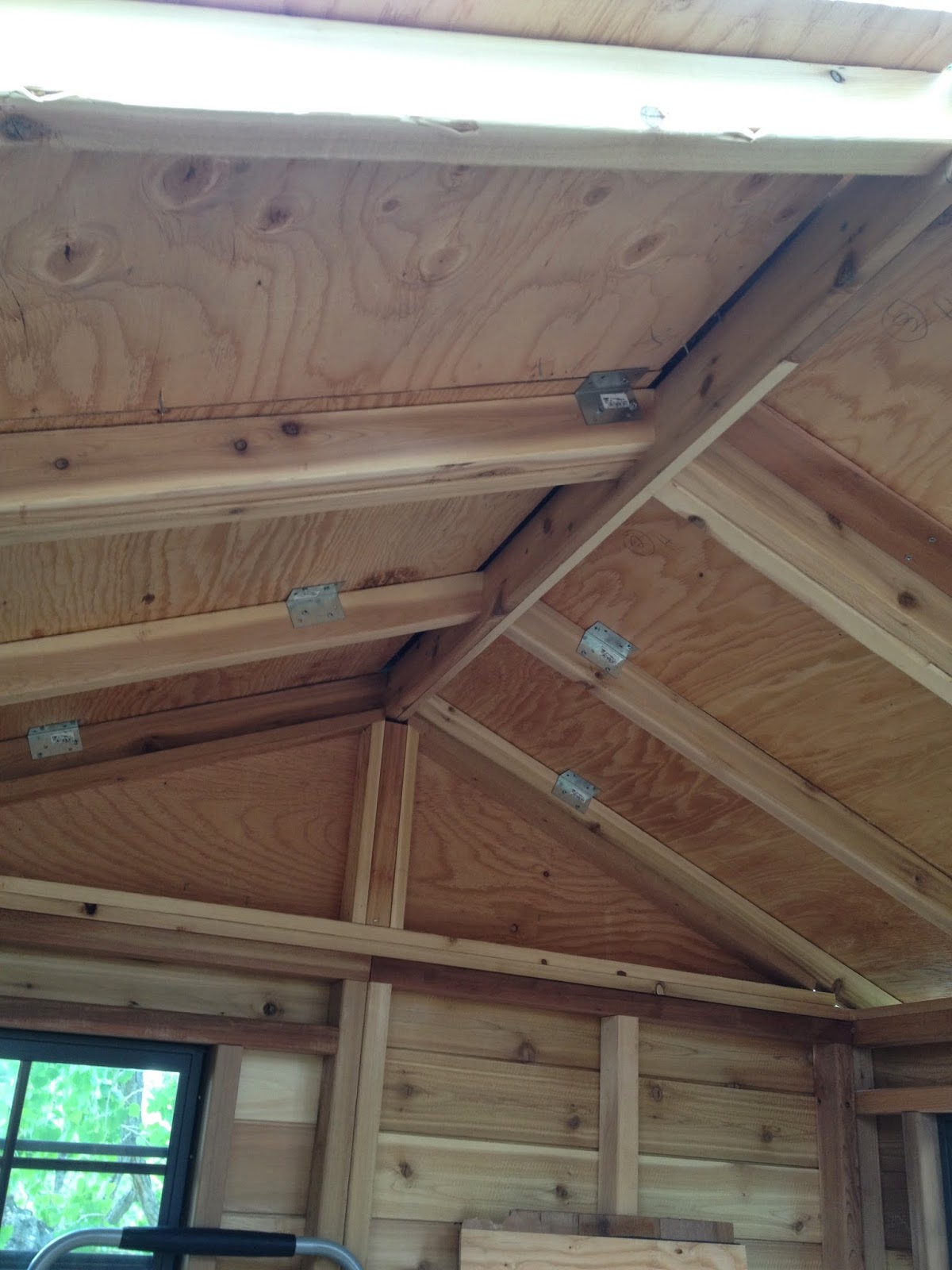 Inside you can see the extra hardware to support the extra number of roof panels. 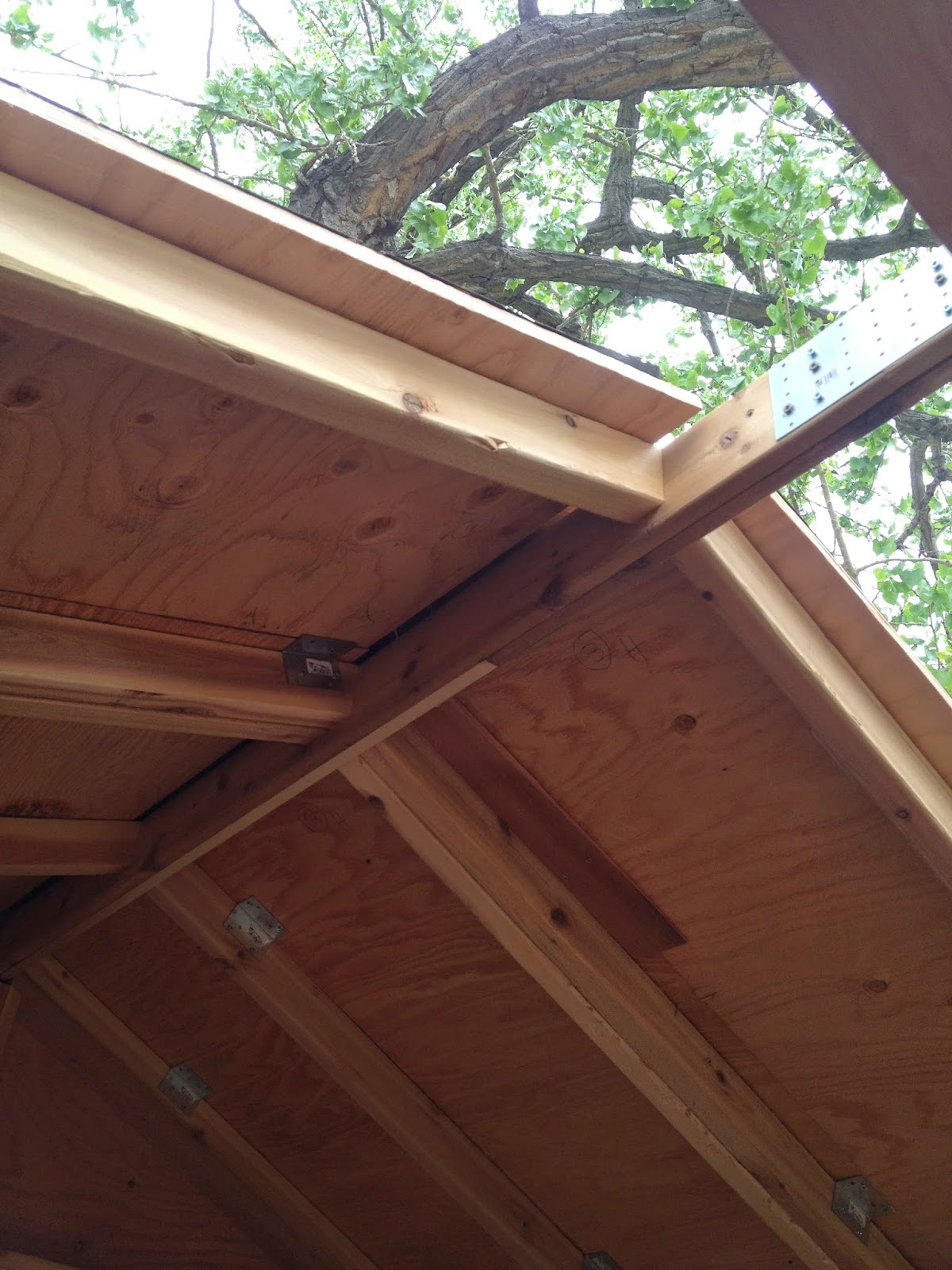 Typical gap through which I'd have to slide a roof panel.

Eventually I got to the end and found there wasn’t any safe way to reach and place the last couple of top shingles without re-fixing a new safety anchor for myself; since the gap was over the “deck” area, I decided to let it slide for a while.

Next up I’d be hanging the treehouse rope ladder.

On to Part 16: Hanging the Treehouse Rope Ladder
Posted by DIYDad at 5:30 AM