Still want to build a treehouse? 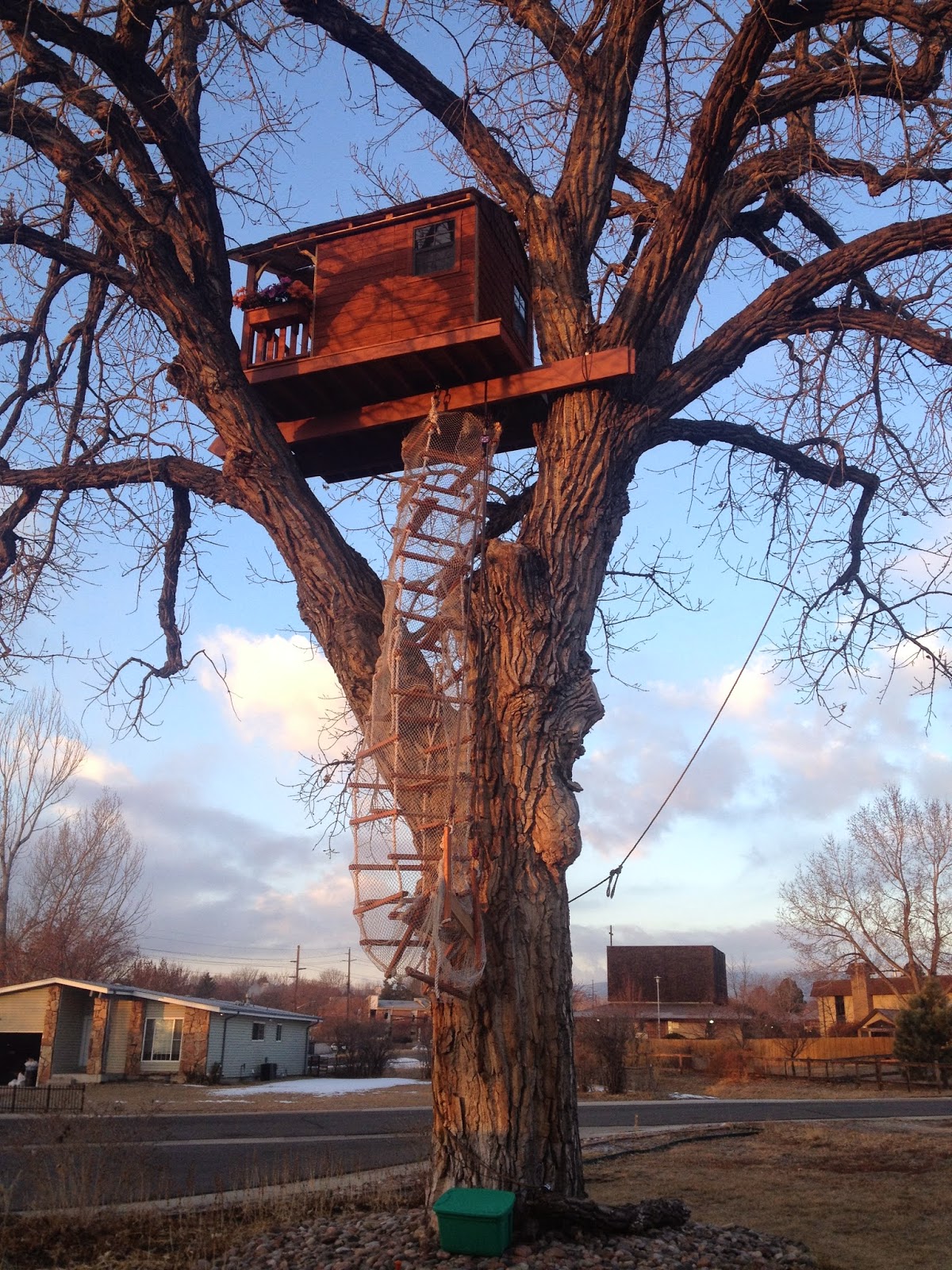 The treehouse on a sunny winter day.

So it’s winter as of this writing, and the treehouse is pretty much dormant until spring. Or until a series of warm days.

I’d thought about insulating it for winter, but really, that would necessitate heating the treehouse as well, which would require a heater, which would require electricity/fuel, and so on. It didn’t seem that likely any of us would want to head up there with a foot of snow on the ground — and that prediction’s proven correct, I haven’t even been tempted.

As far as sturdiness, obviously I’ll know a lot more in the spring, but I can share that we had a tornado warning siren go off in our neighborhood during a thunderstorm that had the audacity to happen right after my daughter’s birthday party — the wind was blowing like crazy, the rain was sideways. Branches were falling all over, including several off the big tree. I figured there would almost certainly be some kind of damage to the treehouse.

Fortunately, when I climbed up the next day, everything was just fine. I inspected the support structure as well as the treehouse itself, even the roof — nothing had moved. It was even dry inside; the last kid down had remembered to close the window, and all the pillows and blankets were bone dry. Thanks, mystery kid!

We keep a couple of small lidded ottoman-type things up there for sitting on, and to store a few bottles of water and some pillows and blankets inside of. There’s also a walkie-talkie that stays up there, hanging from a lanyard hooked to the wall; the rule is to turn it on and check in with the ground as soon as they’re up and the trap door is closed. That rule is easy to follow, because it’s also a good way to ask for the adults to send snacks up in the basket that’s up there, tied to a very long rope (the final "resting place" of that cord I'd used to raise the first treehouse beam).

In the summer, with all the leaves on the tree, you don’t even notice the treehouse walking down the street until you’re right under it; in winter, it can be seen for blocks in every direction. I find people stop and look from time to time, and about every two months someone gets out or comes to the door to tell me how neat it looks, or to ask questions about how one thing or another was done (usually it's the process of installing the treehouse bolts that seems most impossible to them). And I'll talk their ear off.

I’m always happy to talk about the treehouse.

On to: The VW Bus Bed or The Solar Stock Tank Swimming Pool
Posted by DIYDad at 5:01 PM