The VW Bus Bed gets taller and more complicated 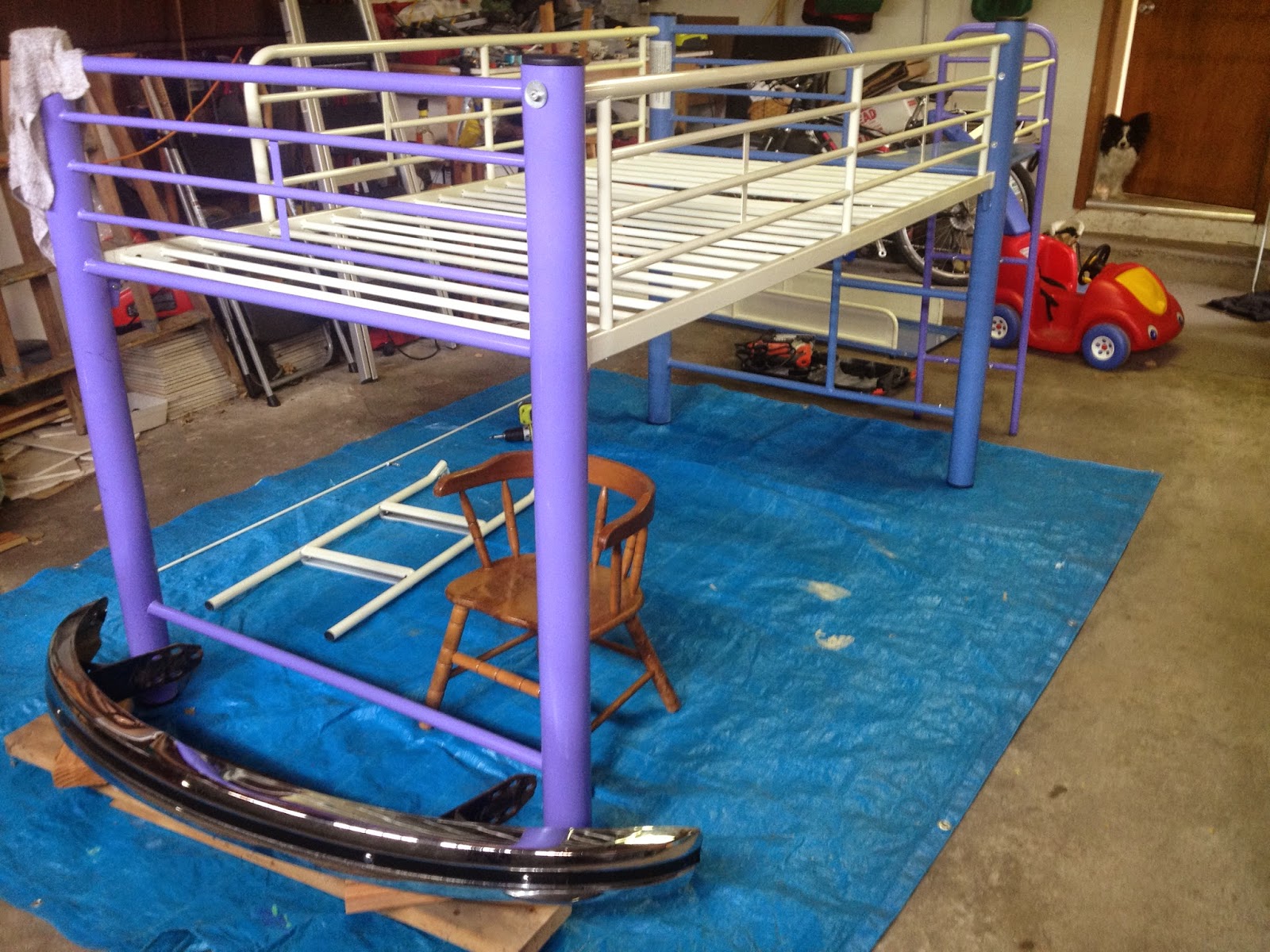 I briefly considered ending here and telling her to use her imagination. Briefly.

The first thing I noticed putting things together — and putting my 2-1/2 year-old daughter’s chair in for “scale” — was that it the whole bus bed would wind up being too short. She’d bonk her head every time she went under, to say nothing of me. So I had to raise it up.

I experimented routing out a couple of pieces of 4x4 posts I had sitting around. First I’d make a shallow cut with the hole drill — the same diameter as the bunk bed posts. 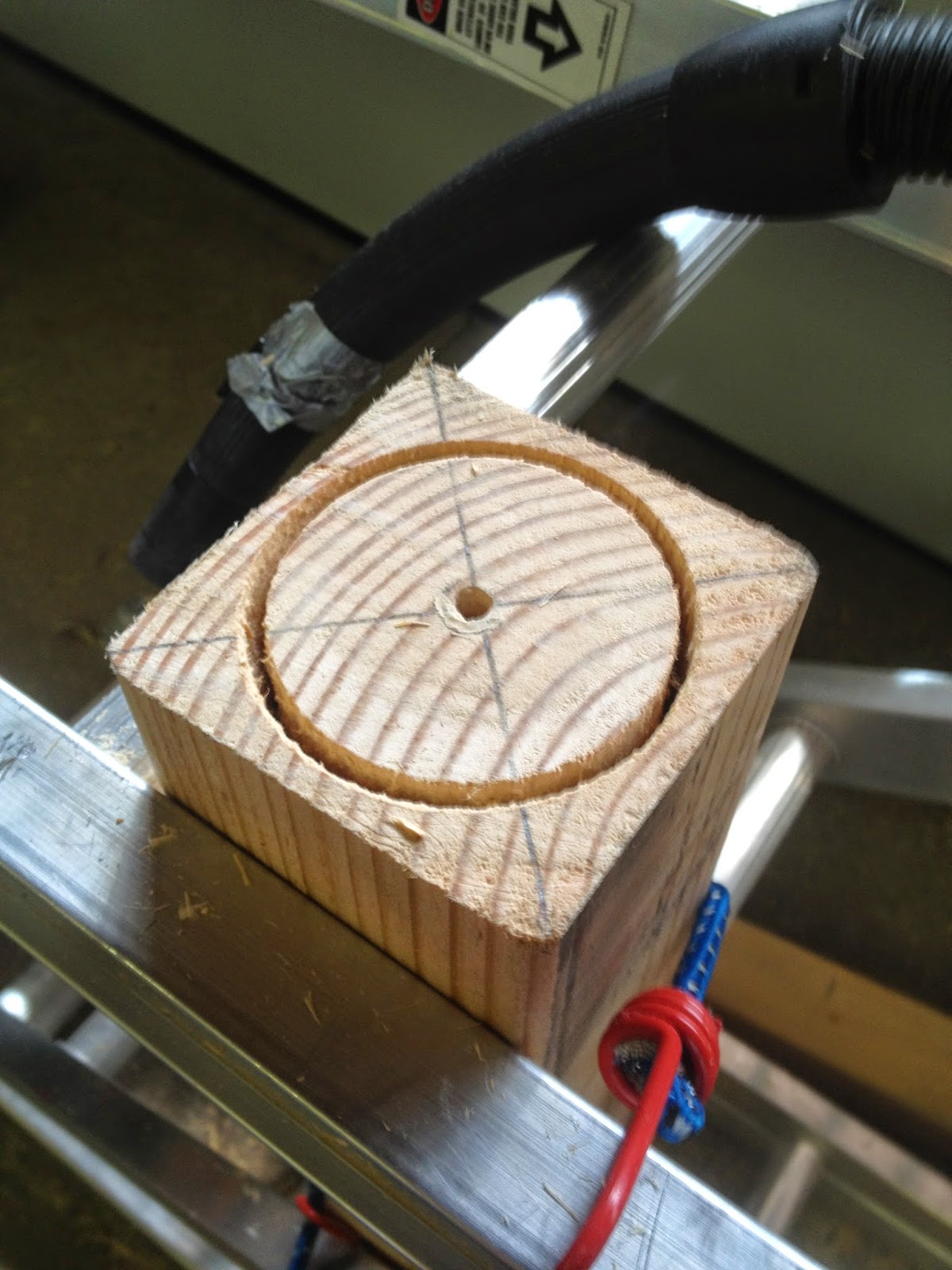 Note the shop vac for catching sawdust. Sort of worked.

Then I’d rout the extra wood out. I thought I had a router for some reason, but I didn’t. Dremel took a while, but worked fine. 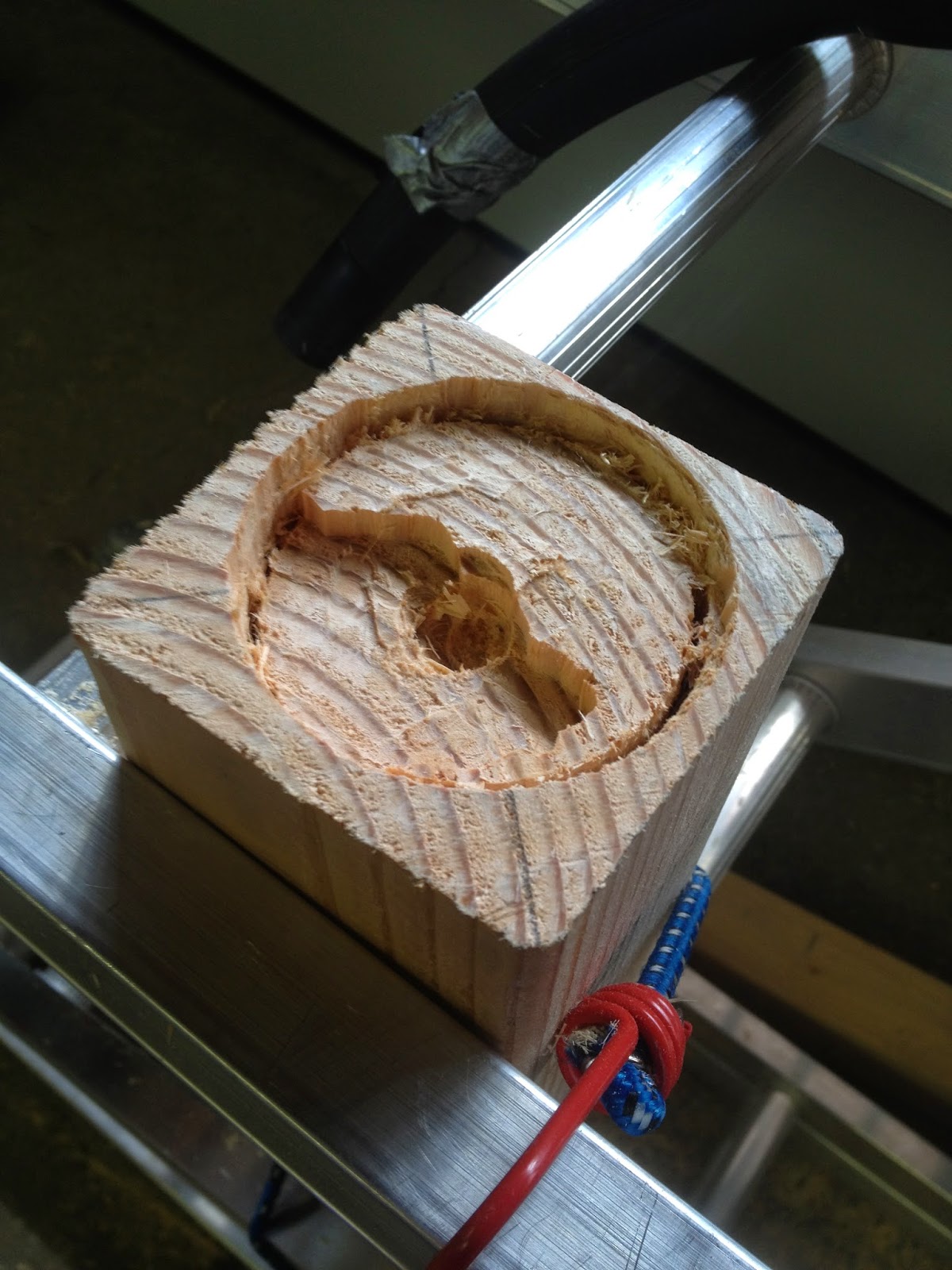 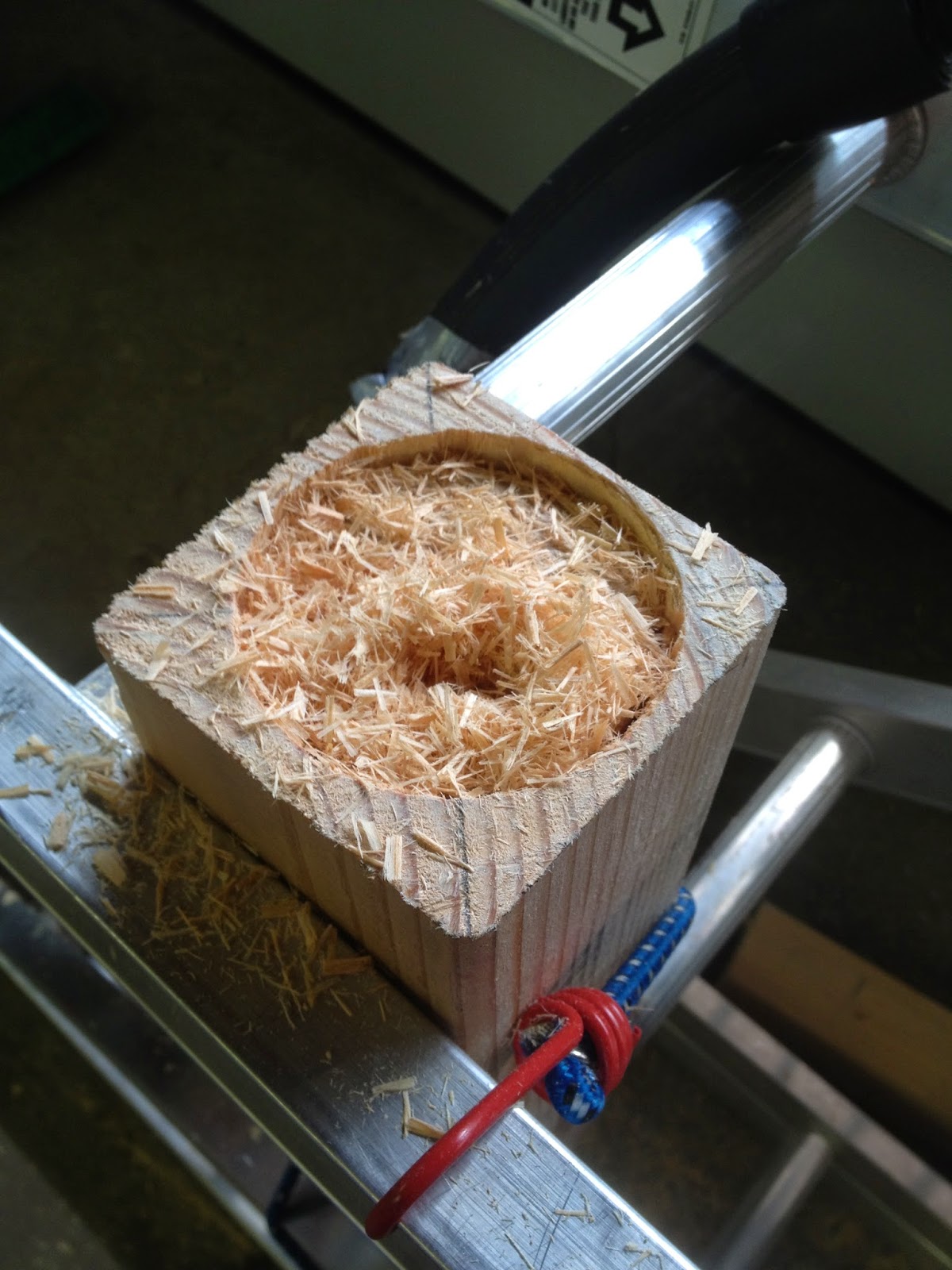 I did it four times, and the posts fit snugly, about two inches sunk into the 4x4. The result was level and high enough. It wasn't however particularly stable. 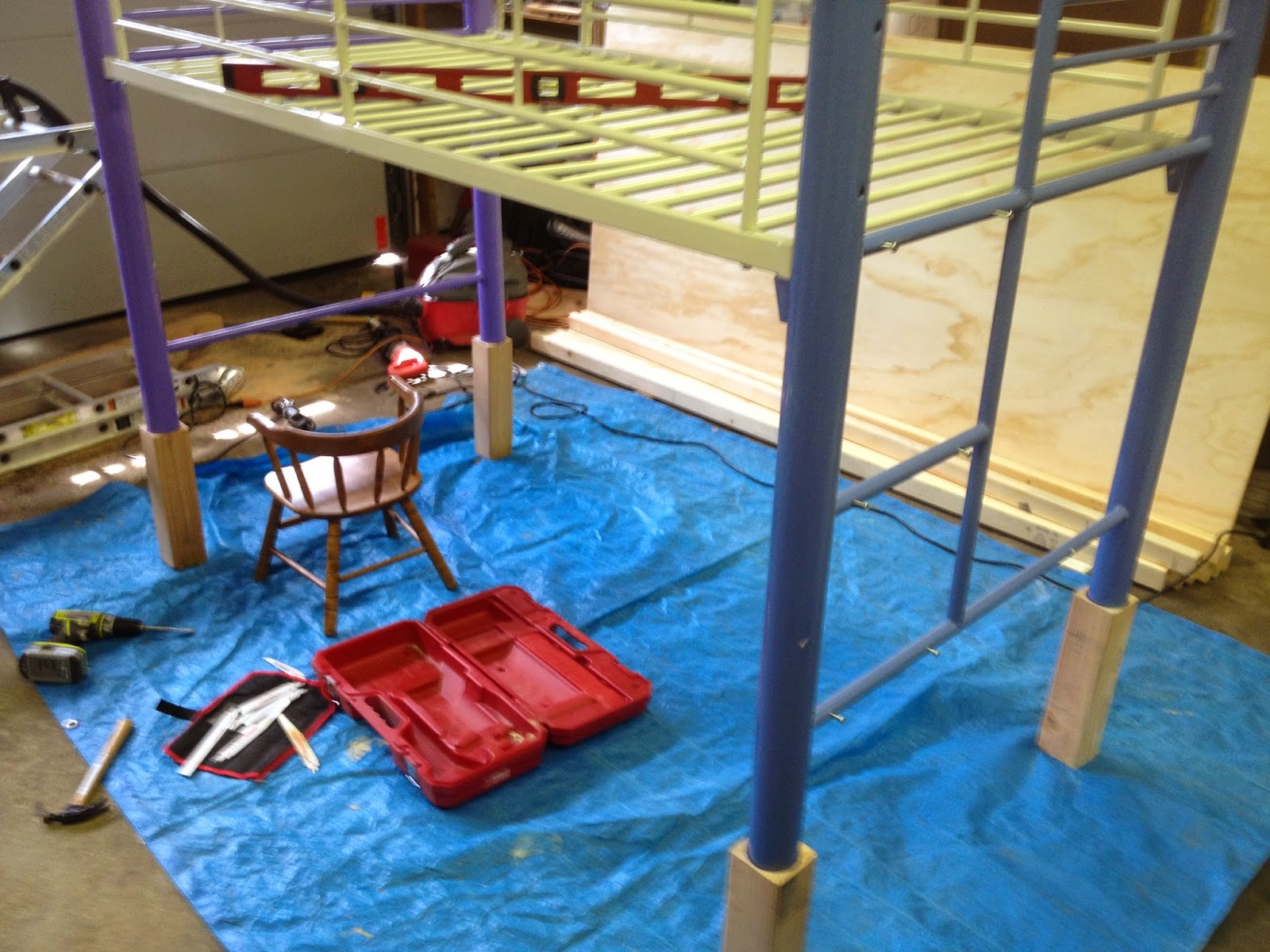 I built a box around my 4x4 posts using 2x4 lumber and a bunch of deck screws — three in a little triangle on each end of each board, plus one more on the end for good (?) measure. 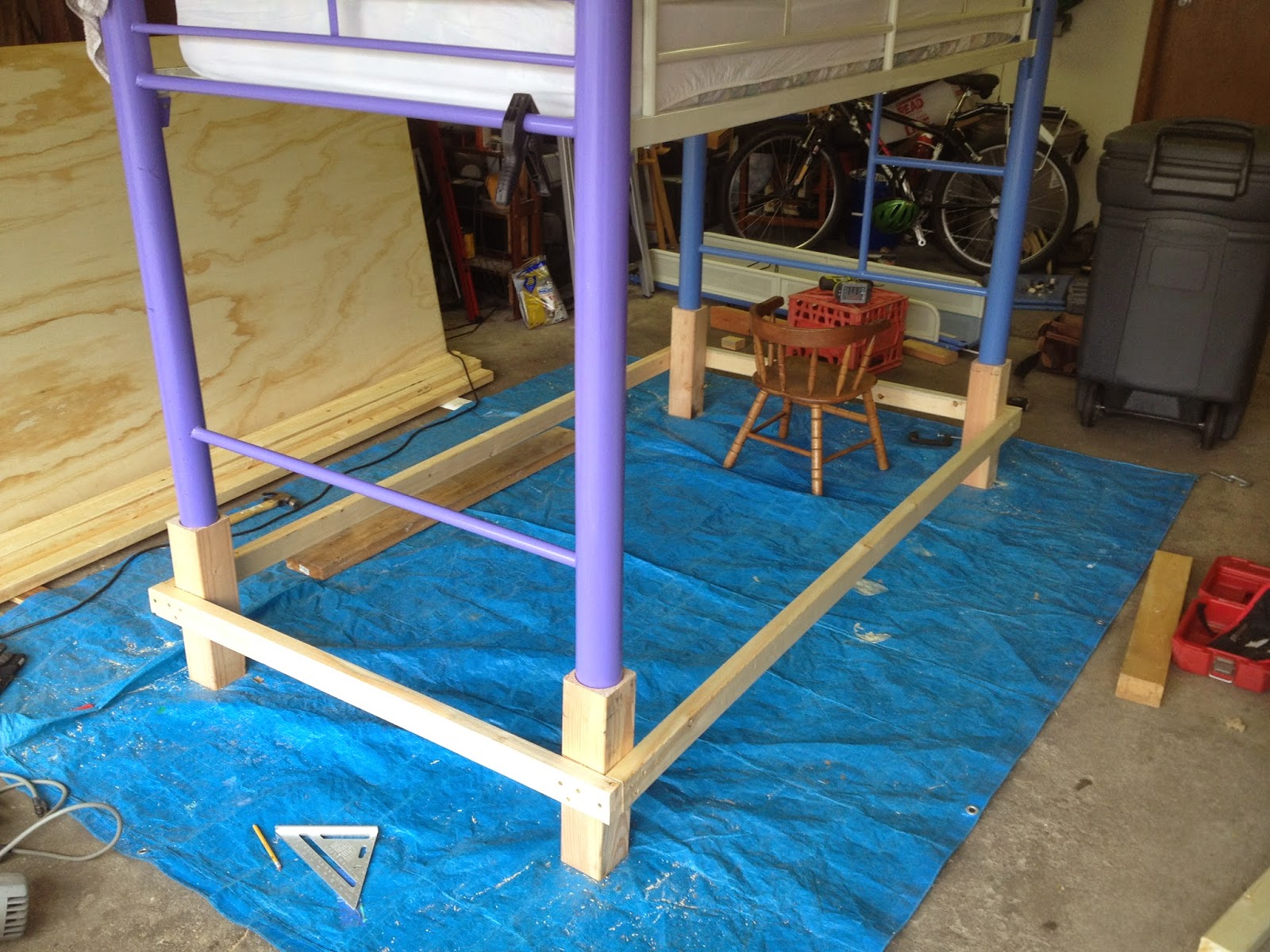 This is where I'll brag I didn't buy a single new screw for this whole project; I tackled it all with my random screw jar. Which was pretty huge at the time.

It was surprisingly rock solid. I threw a mattress on top and let my daughter climb around a bit, and it barely moved. 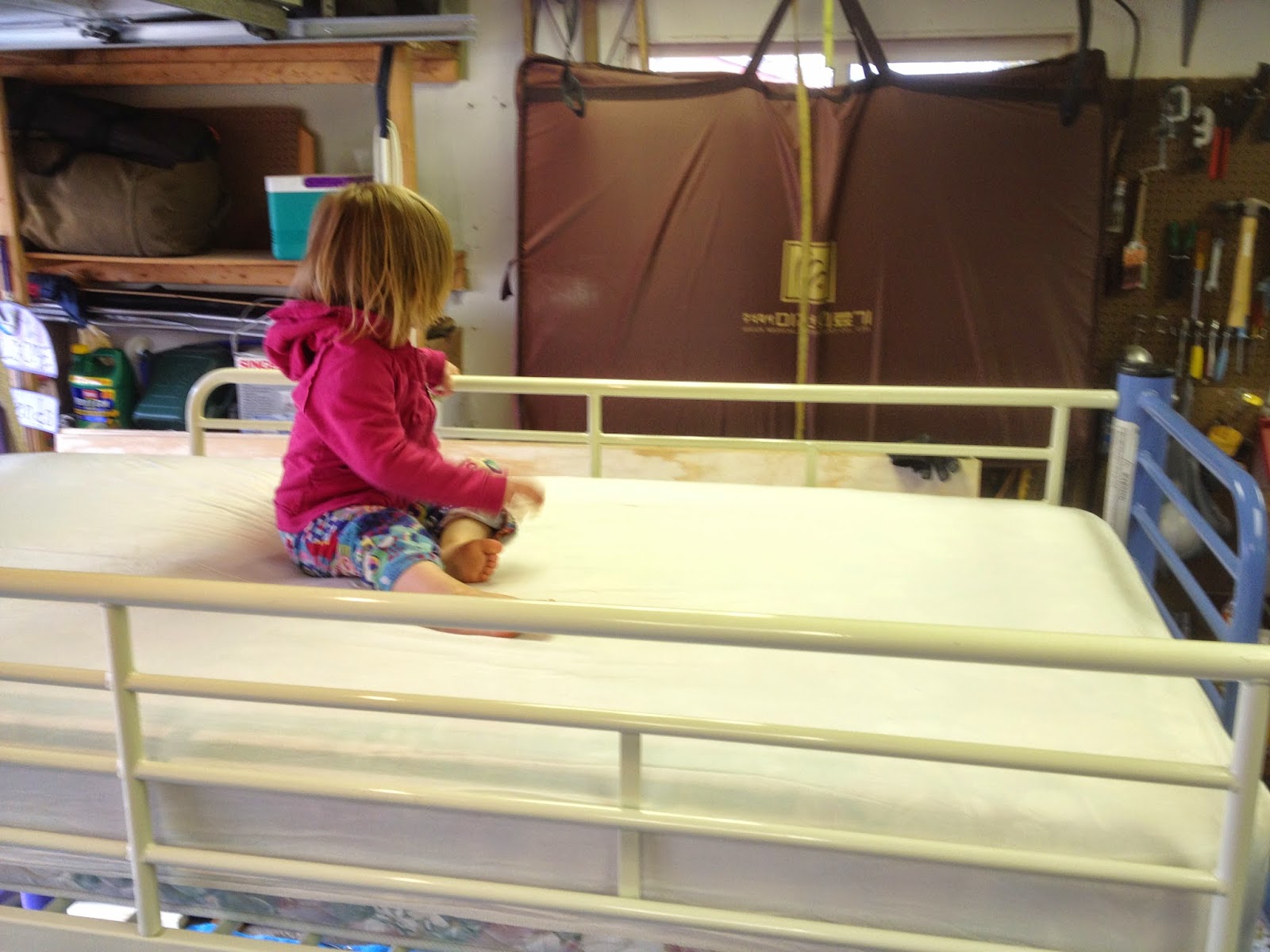 Similarly, I sat her down inside and asked her to imagine driving, while I looked and tried to imagine how the pieces would sit. 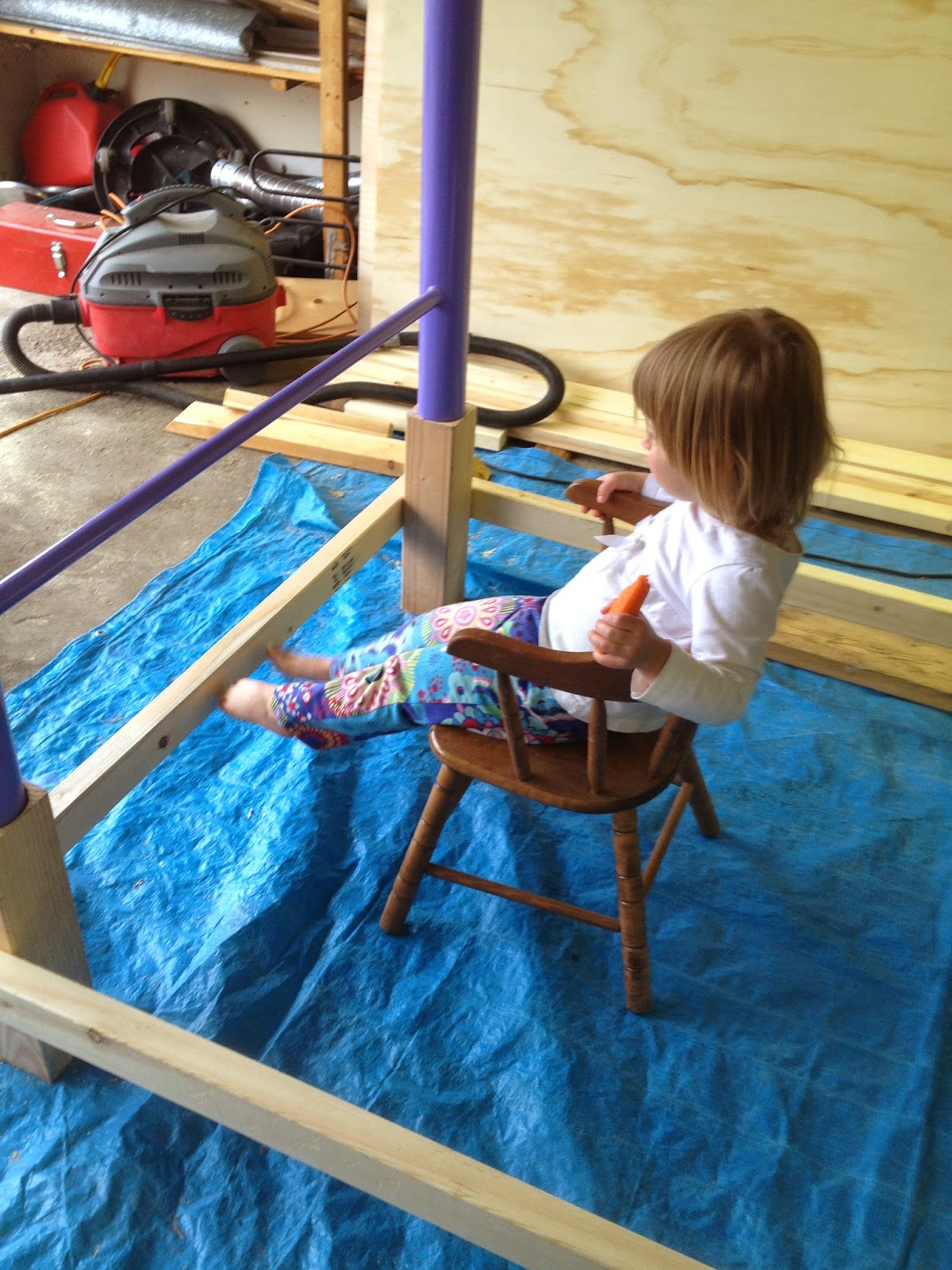 Driving and eating a carrot.

I’d decided after unloading the plywood that it would be too wobbly to just cut a VW bus out of and hang up there; it needed a frame. So I bought a bunch of 2x3 lumber and started screwing it together. I’d love to tell you that I had a plan (or even a sketch) that I started out with, but that wouldn’t be true at all. I was making this up as I went along. 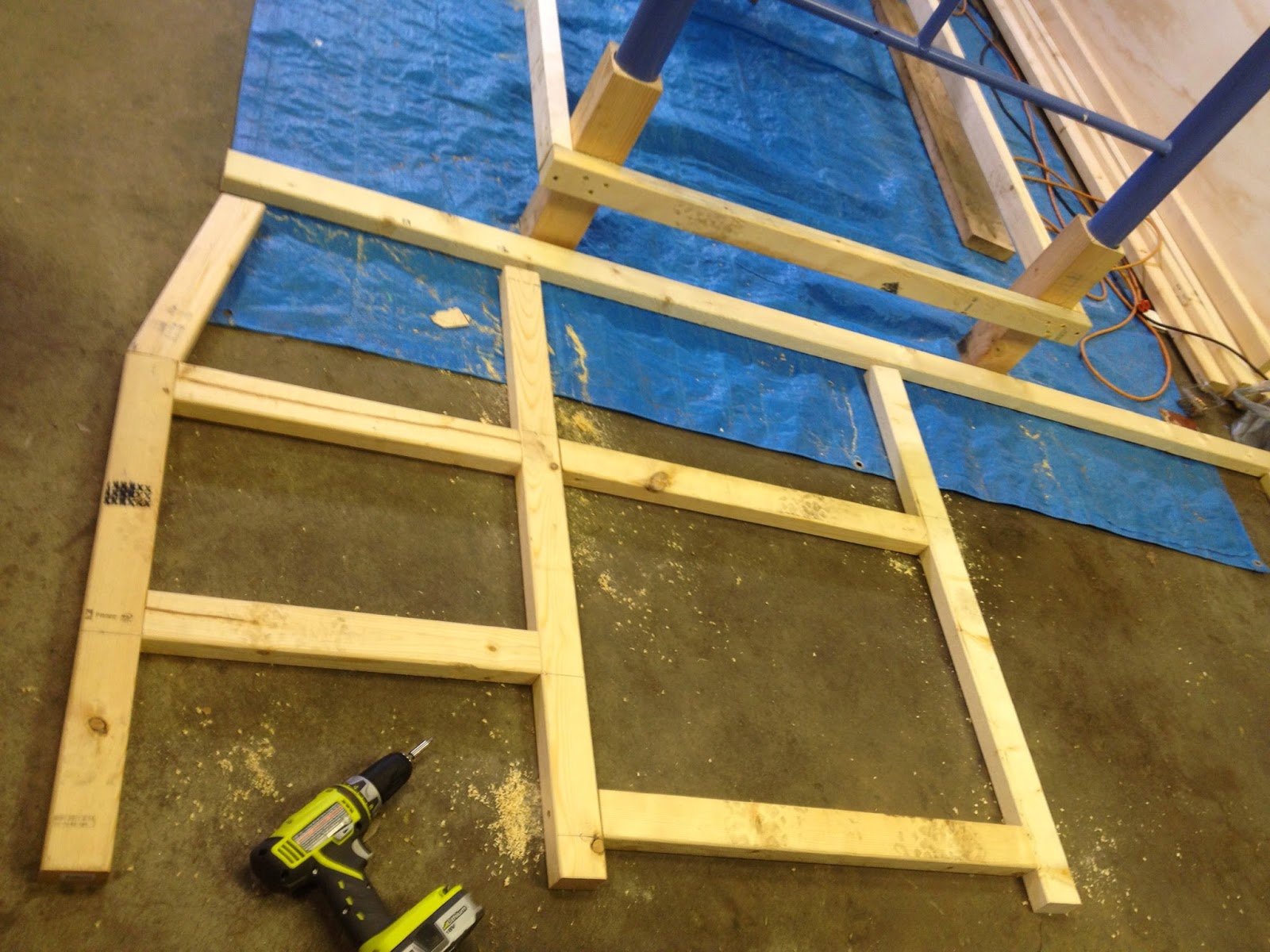 I’d connect the pieces with a single deck screw by first drilling a shallow, larger hole about halfway into the 2x3, then inserting the deck screw and attaching them to each other.

I stood the frame up and clamped it to the bunk bed, then drilled a couple of holes in the bottom (and through my “foundation” frame) for bolts. I figured I’d never get this thing into my daughter’s room in one piece, so if I built it to come apart I could manage to squeeze the sections it down my long, 1960’s-narrow hallways. 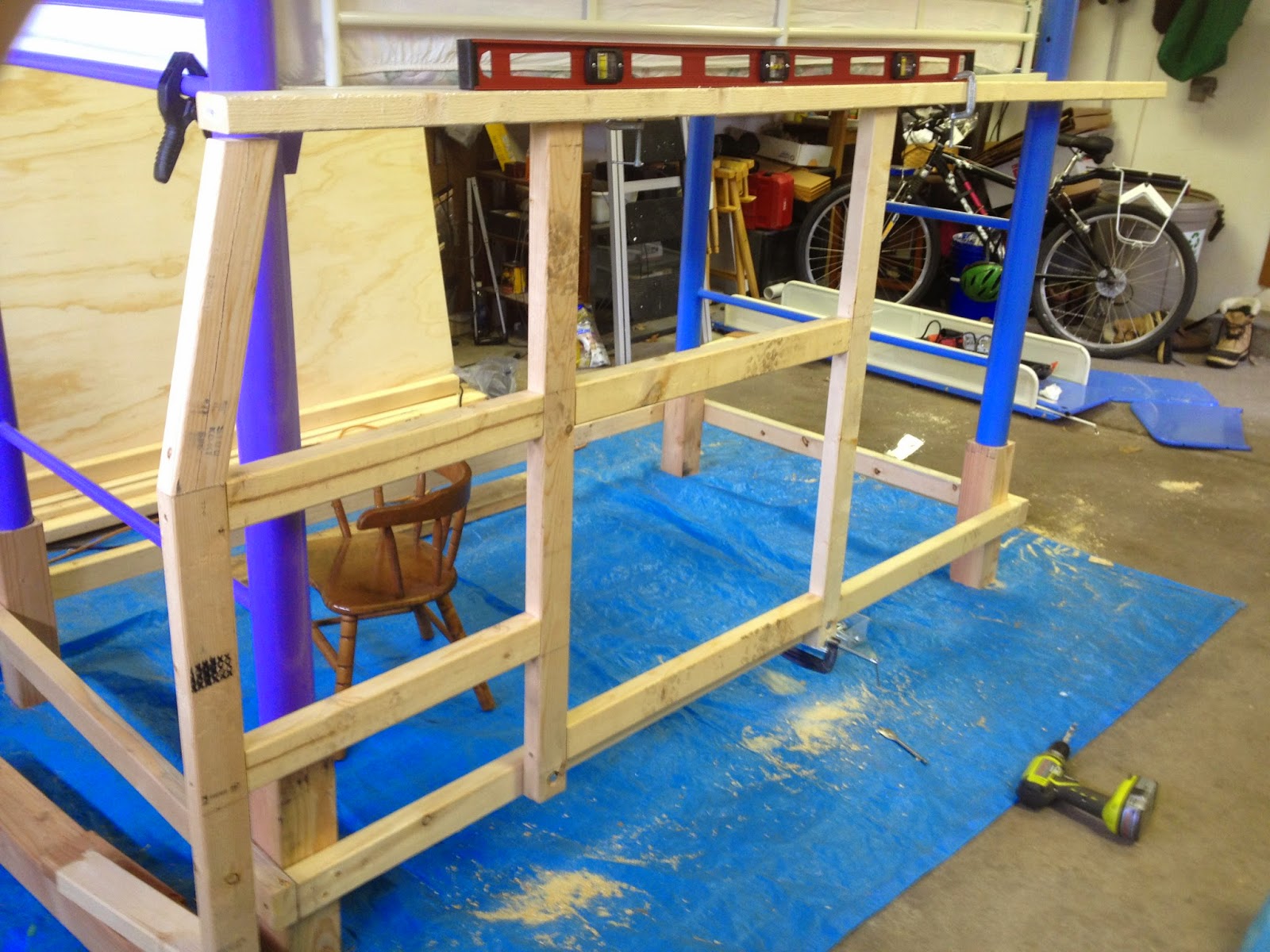 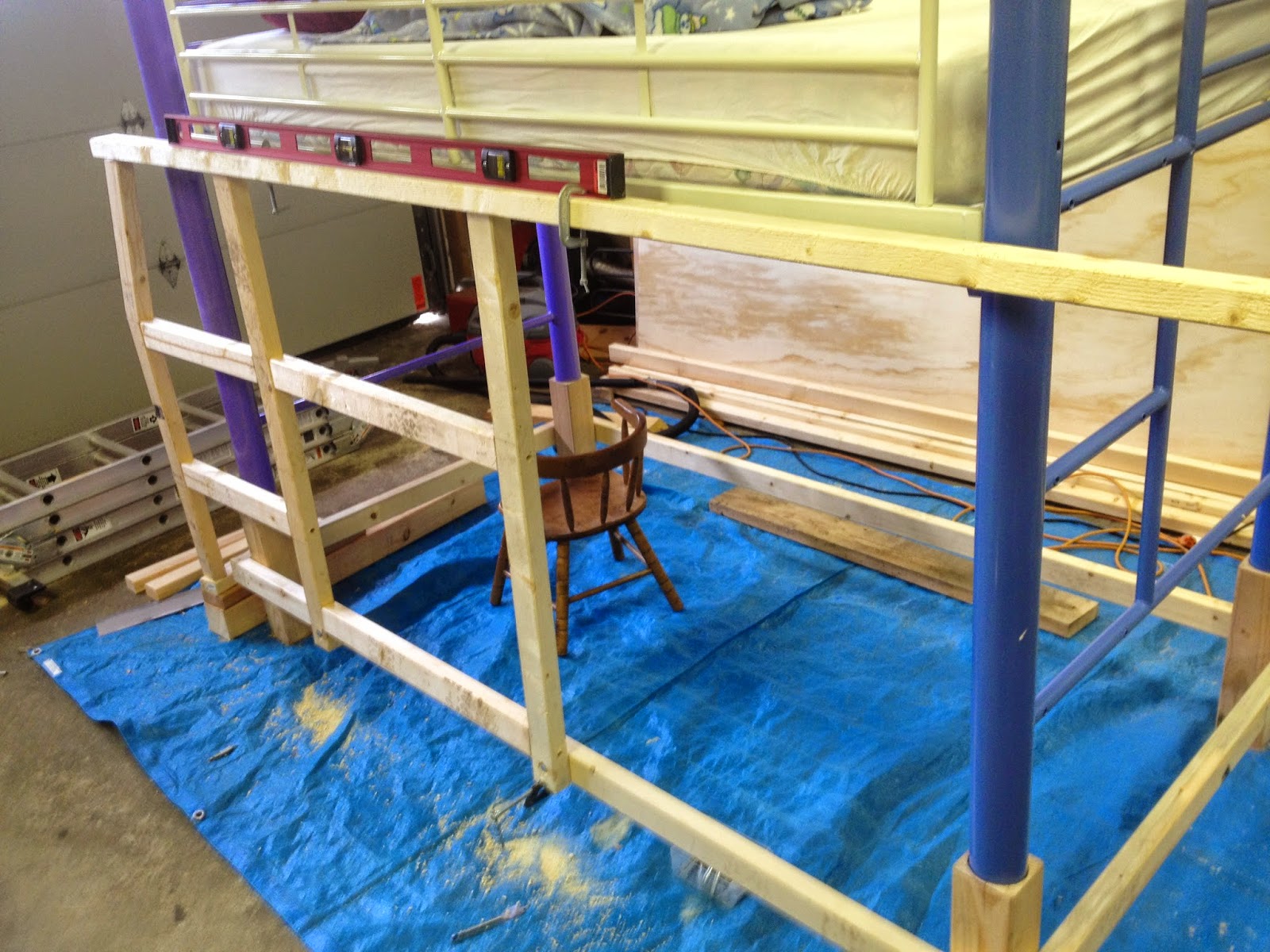 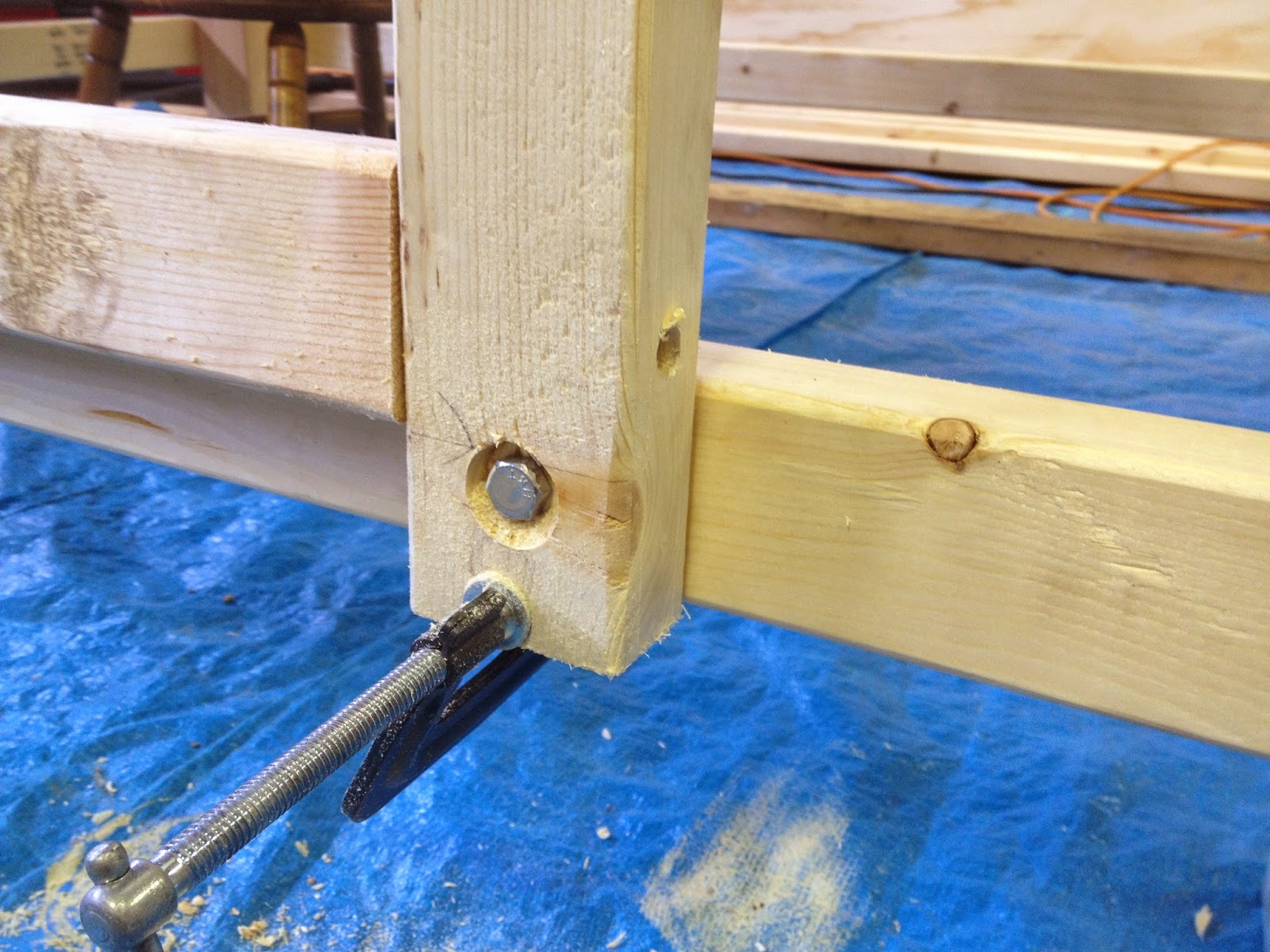 In other words, "removable" but "you'll only do it once or twice."

I couldn’t figure out how I wanted to attach the top, so I decided to work on the VW bus bed bumper box (pardon the alliteration) next.