The VW Bus Bed gets some details

I pondered a lot of different ways to cut windows into the VW bus bed; I wanted to get rounded corners and didn’t trust myself with the jigsaw — particularly since I’d most likely be doing the cutting while the board was mounted  (I was already weary of the process of unbolting each side).

The solution turned out to be to use a large hole bit on the drill to get the radius turns, and cut straight (more or less) for the rest of the windows with the jigsaw. I drew about what I wanted with a pencil and straightedge, and went for it. 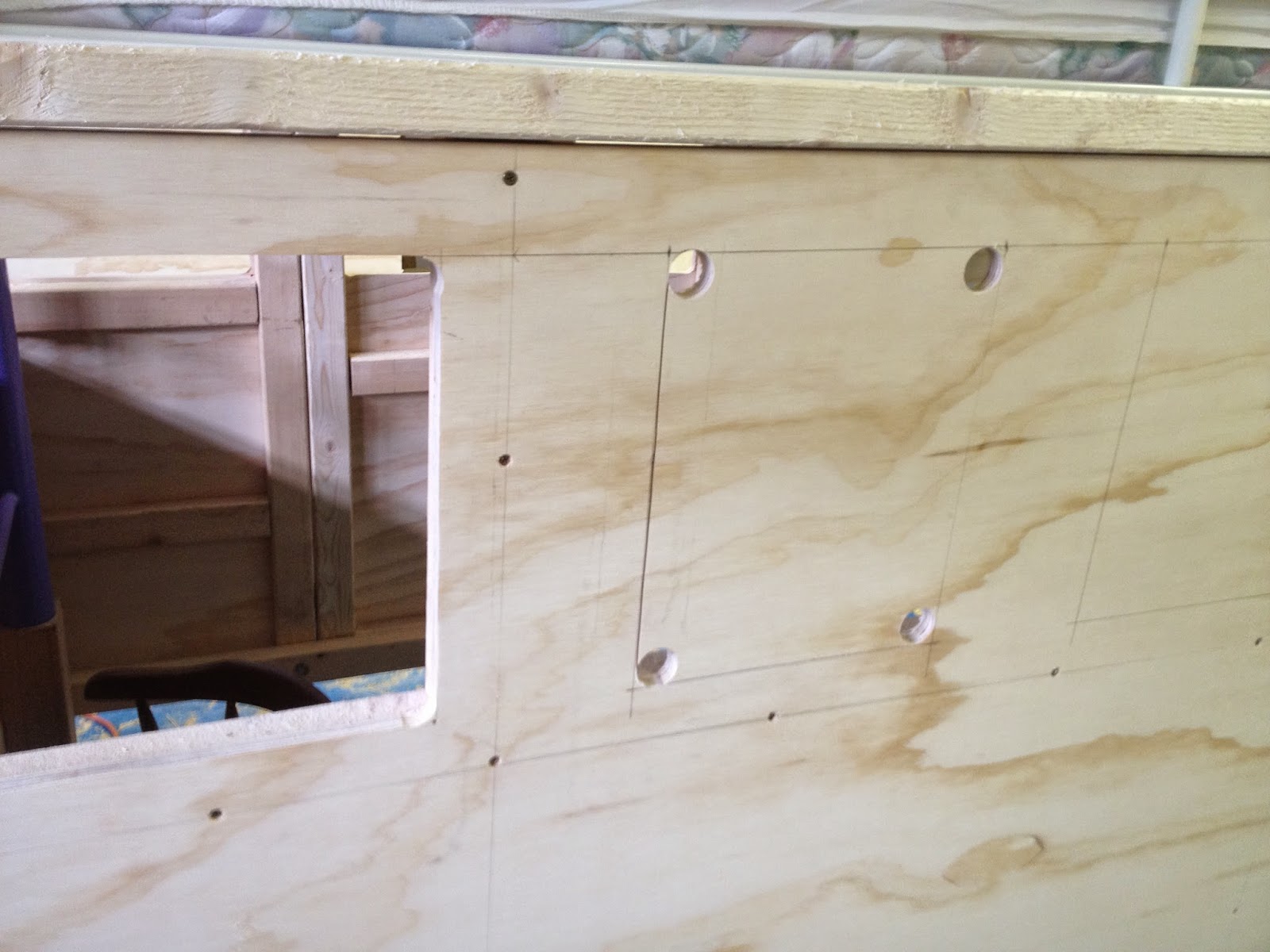 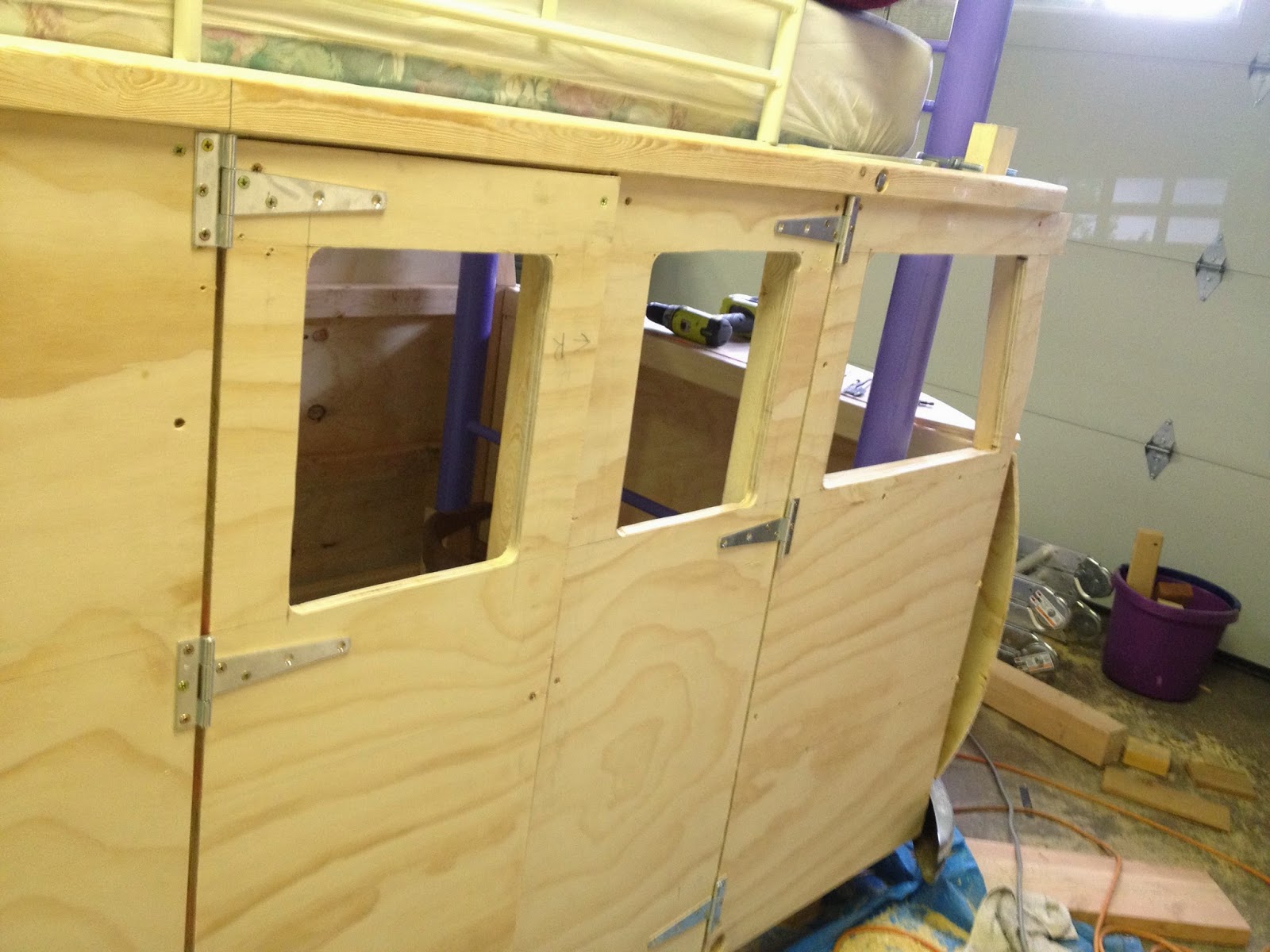 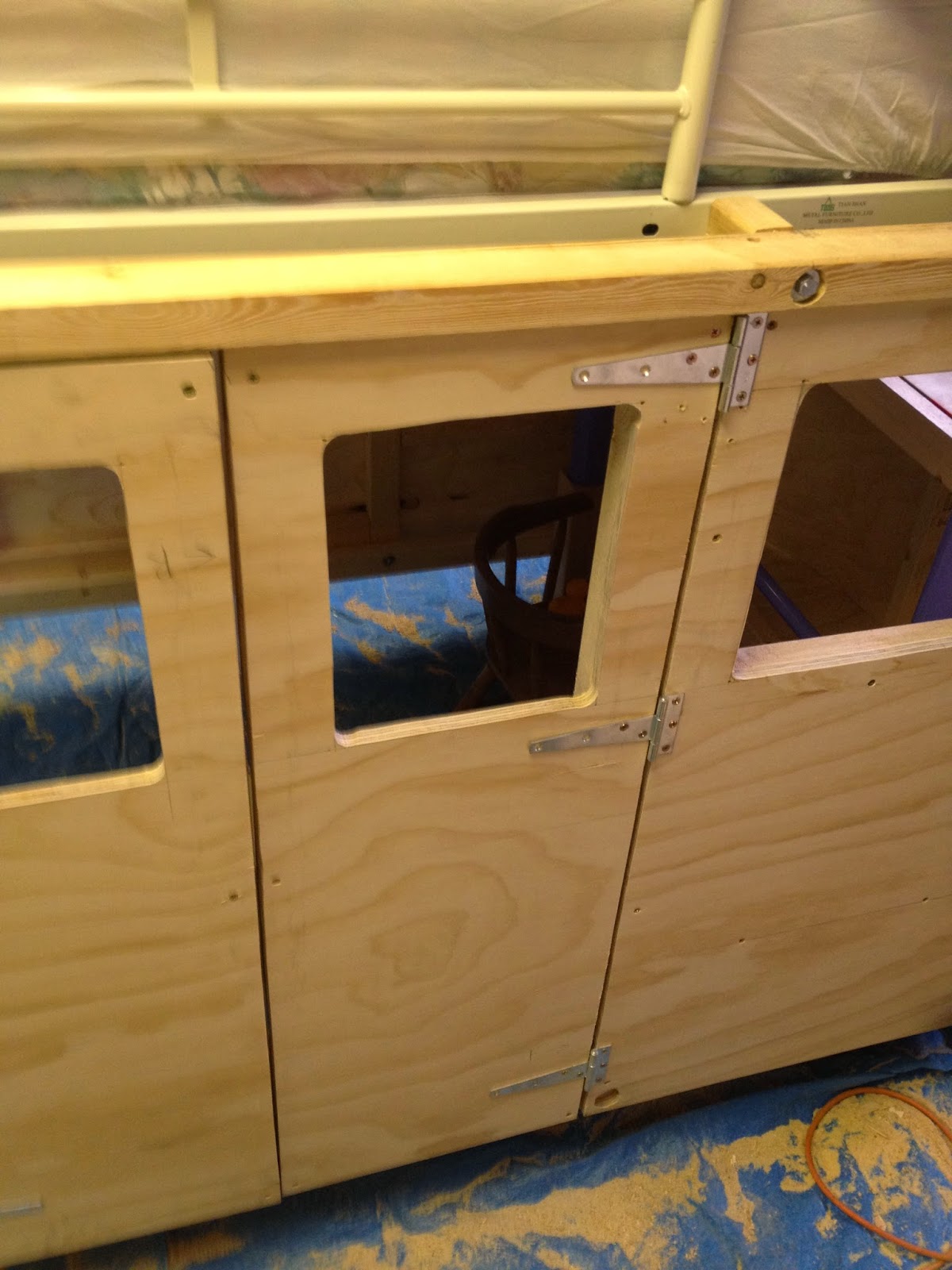 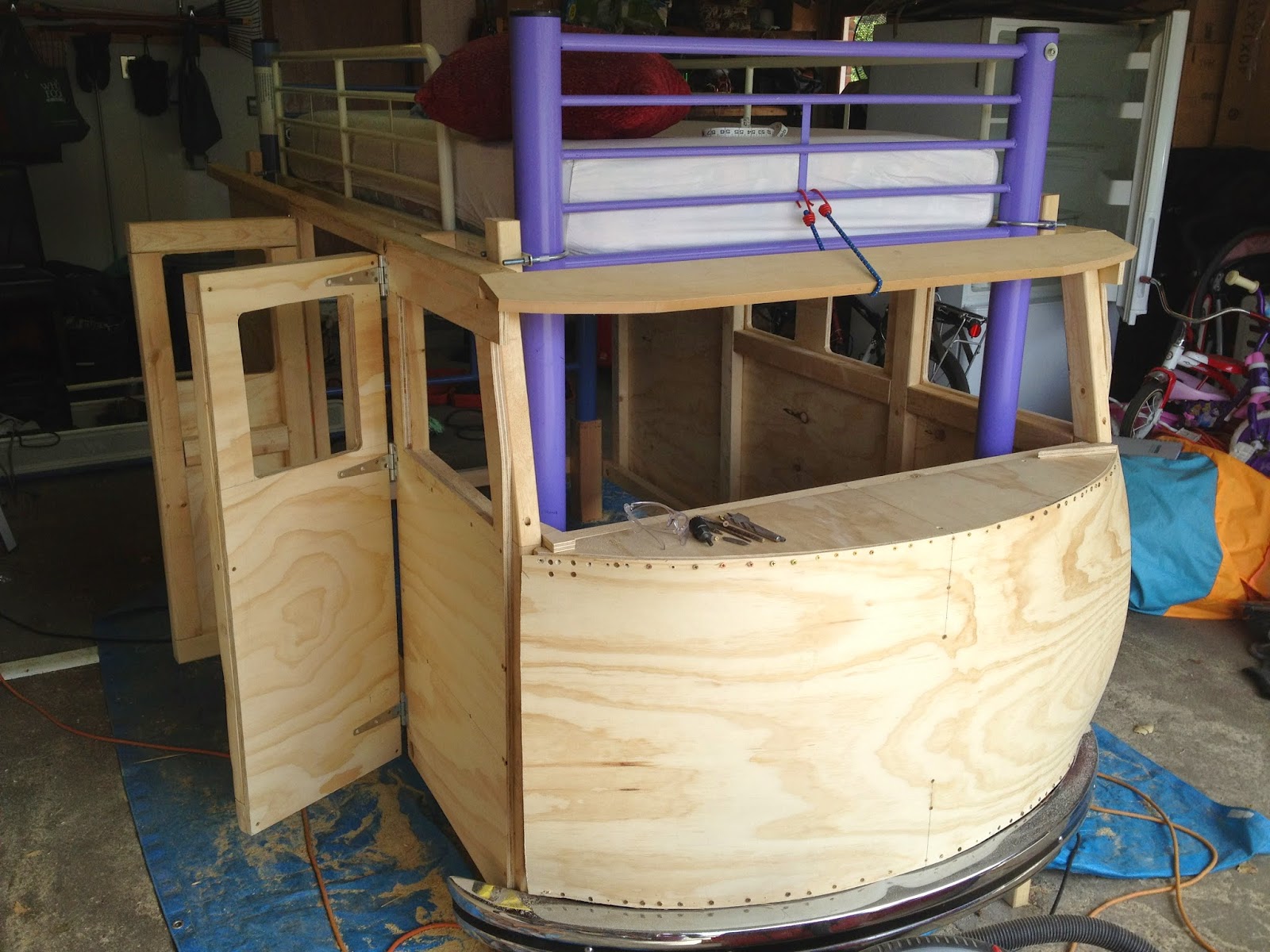 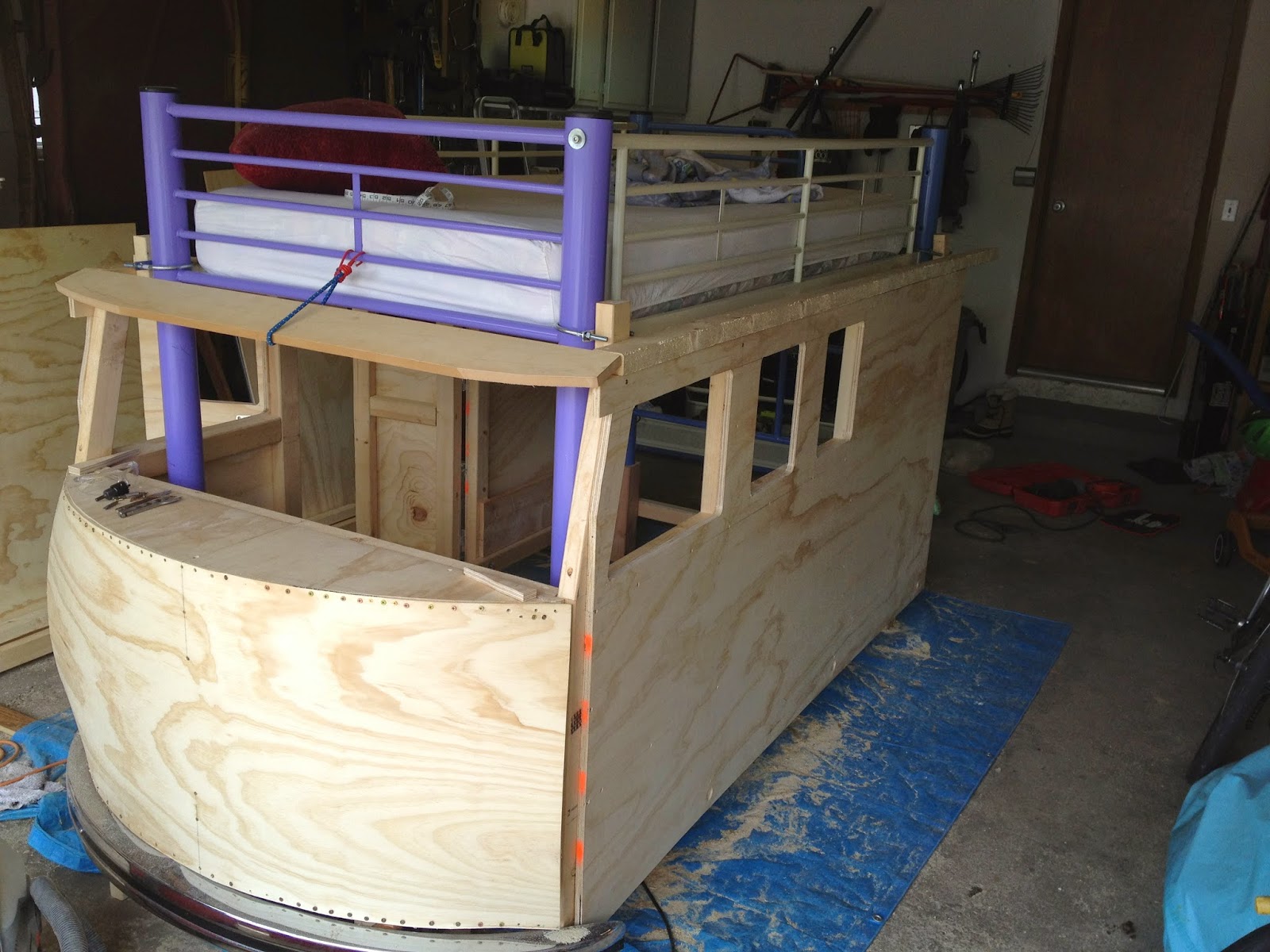 It turned out pretty good. I took the time to put some wood putty over the screw holes as well; I sanded them down later. 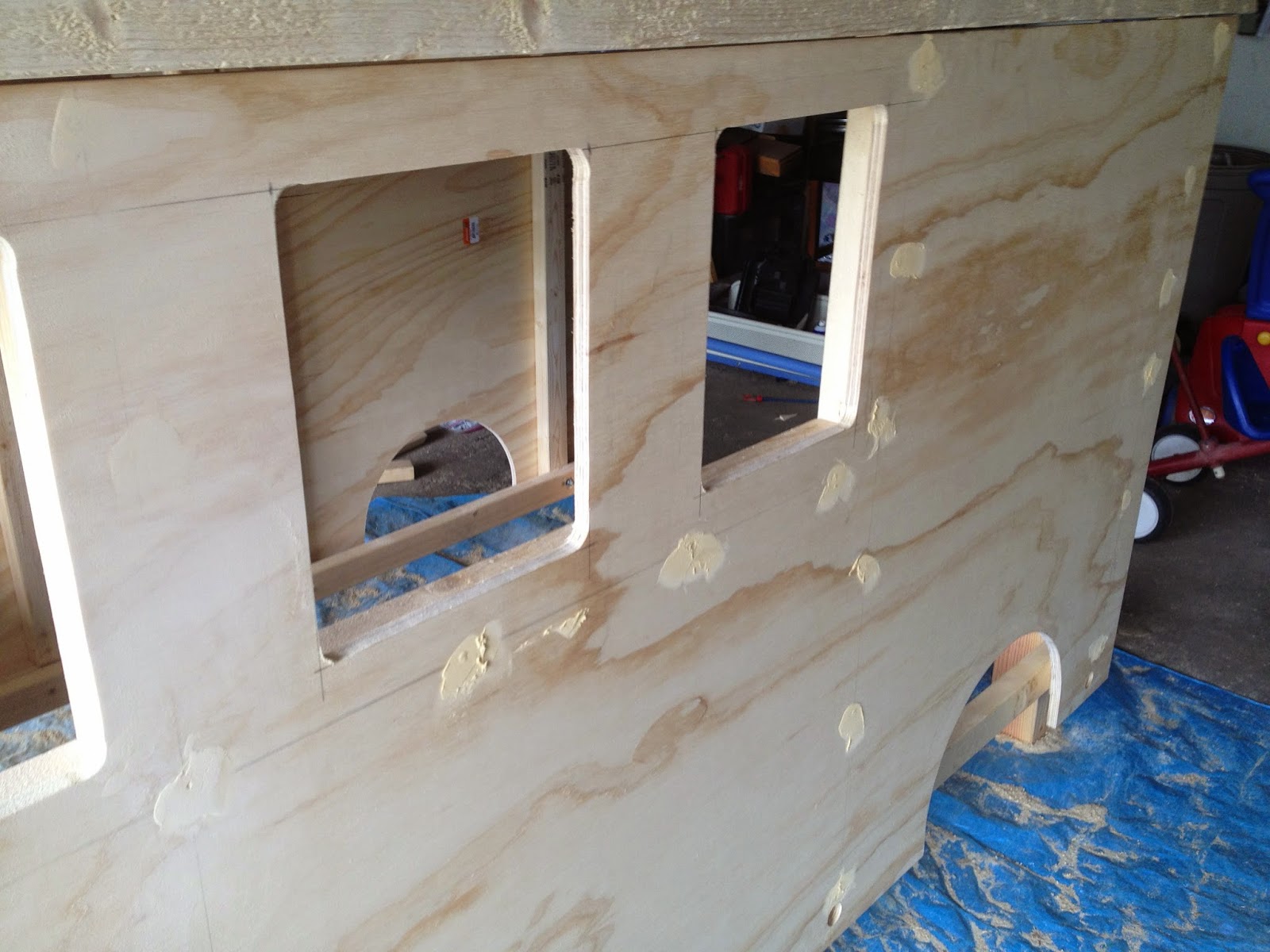 The other new thing you might notice is a piece of wood, a sort of “eyebrow” on the front, that’s bungeed in place temporarily. I wanted some kind of trim to complete the look, and I had a piece of plywood that was left over from cutting out a hole for a bathtub platform. The piece had a nice curve to it, so I trimmed the ends and got my “eyebrow.” 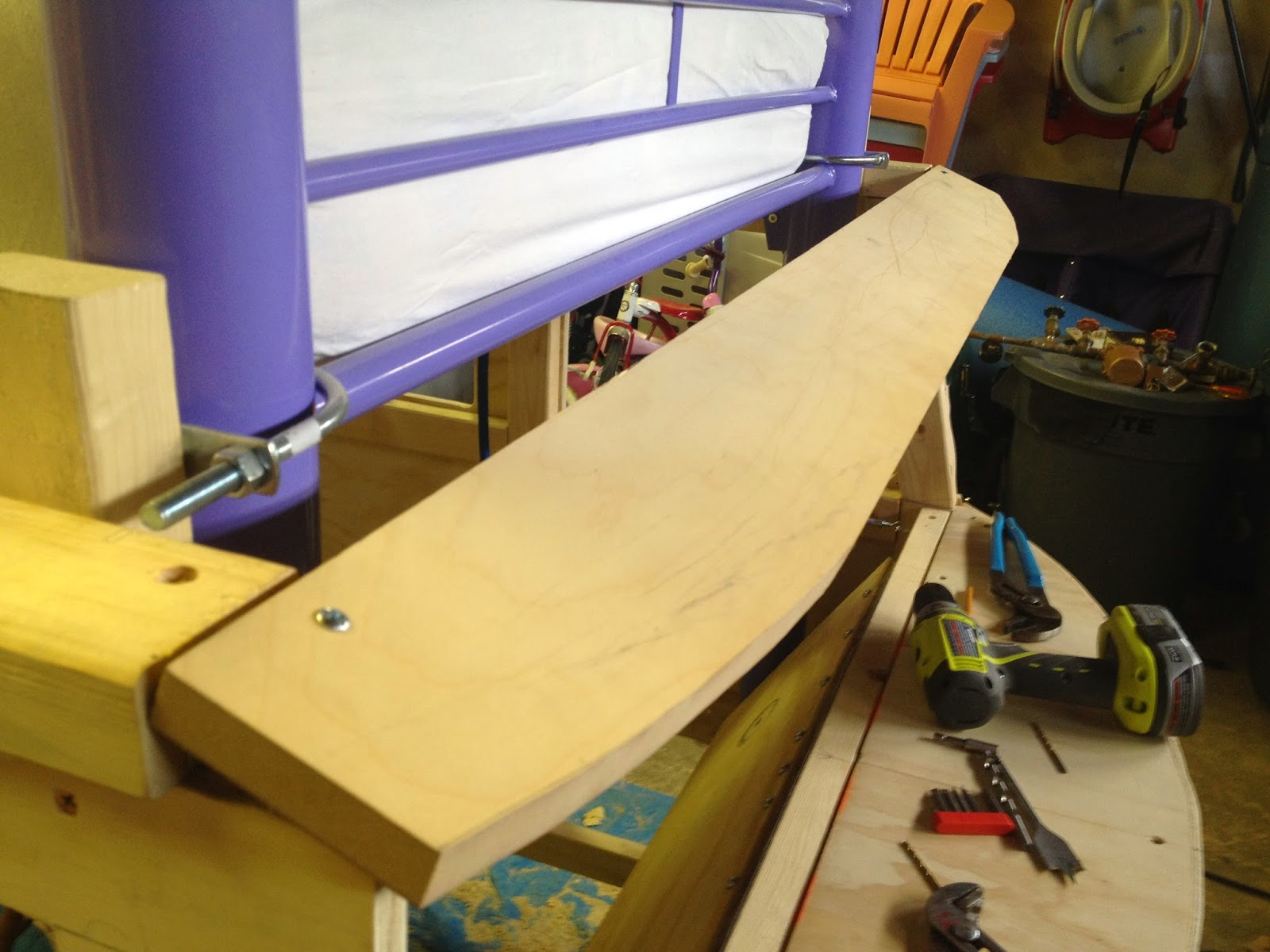 I bent a bracket with a pair of pliers to the angle I wanted, put in some screws, and called it done. 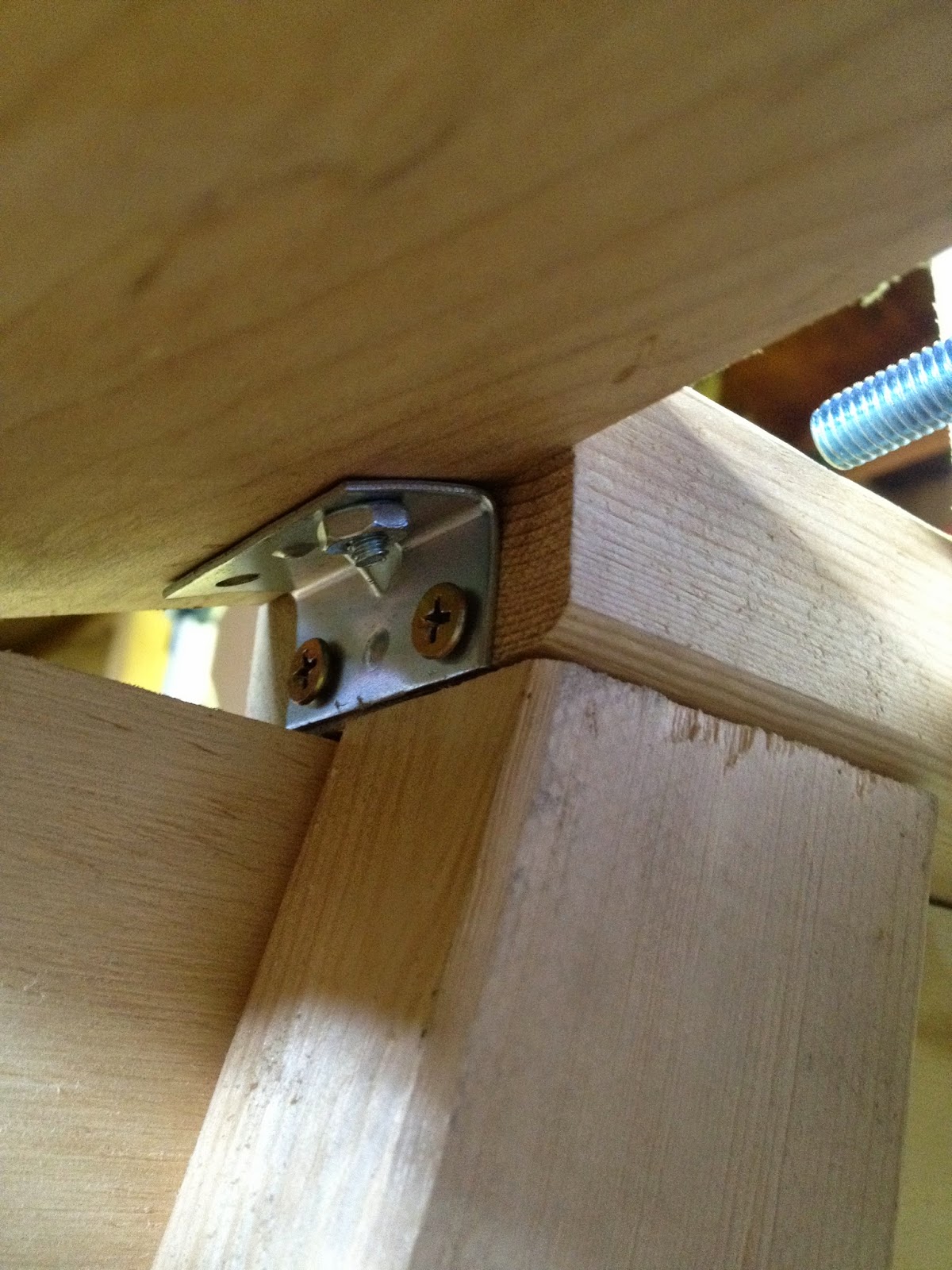 Next I cut a piece of plywood for the dashboard, and mounted it on a piano hinge so it could be lifted up; I knew I wanted to put (at least) some wiring for headlights back in there, so it’d be nice to have an easy way to get in there without standing on my head.

I also took some silver spray paint, and painted the yellow playground steering wheel I’d picked up at the store, then mounted it on the dash so my daughter could try it out. Perfect height! 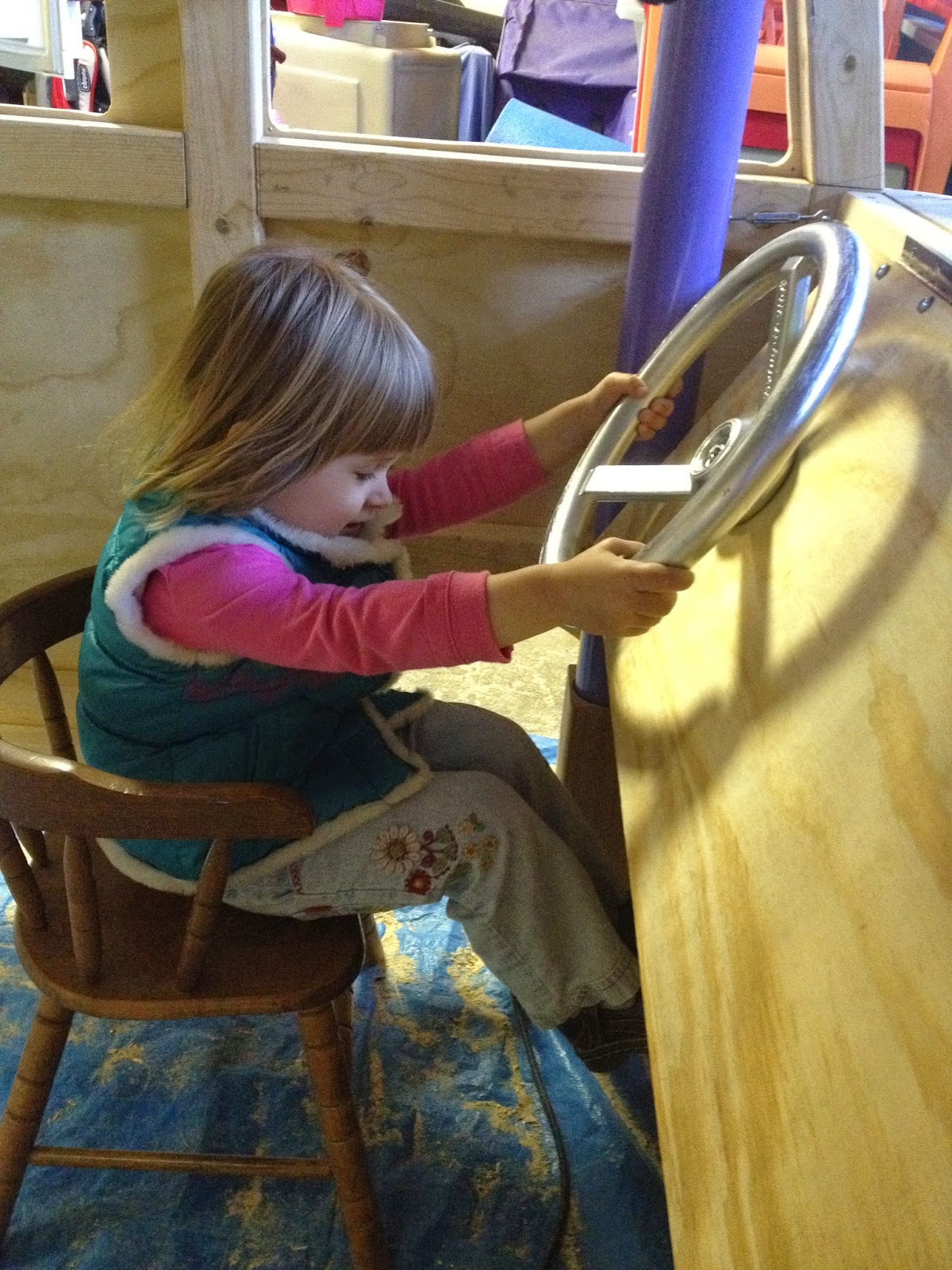 It was time to wash up the VW hub caps to get the wheels ready. They cleaned up fairly nicely, and for the price of zero dollars I was pretty darned happy about them. 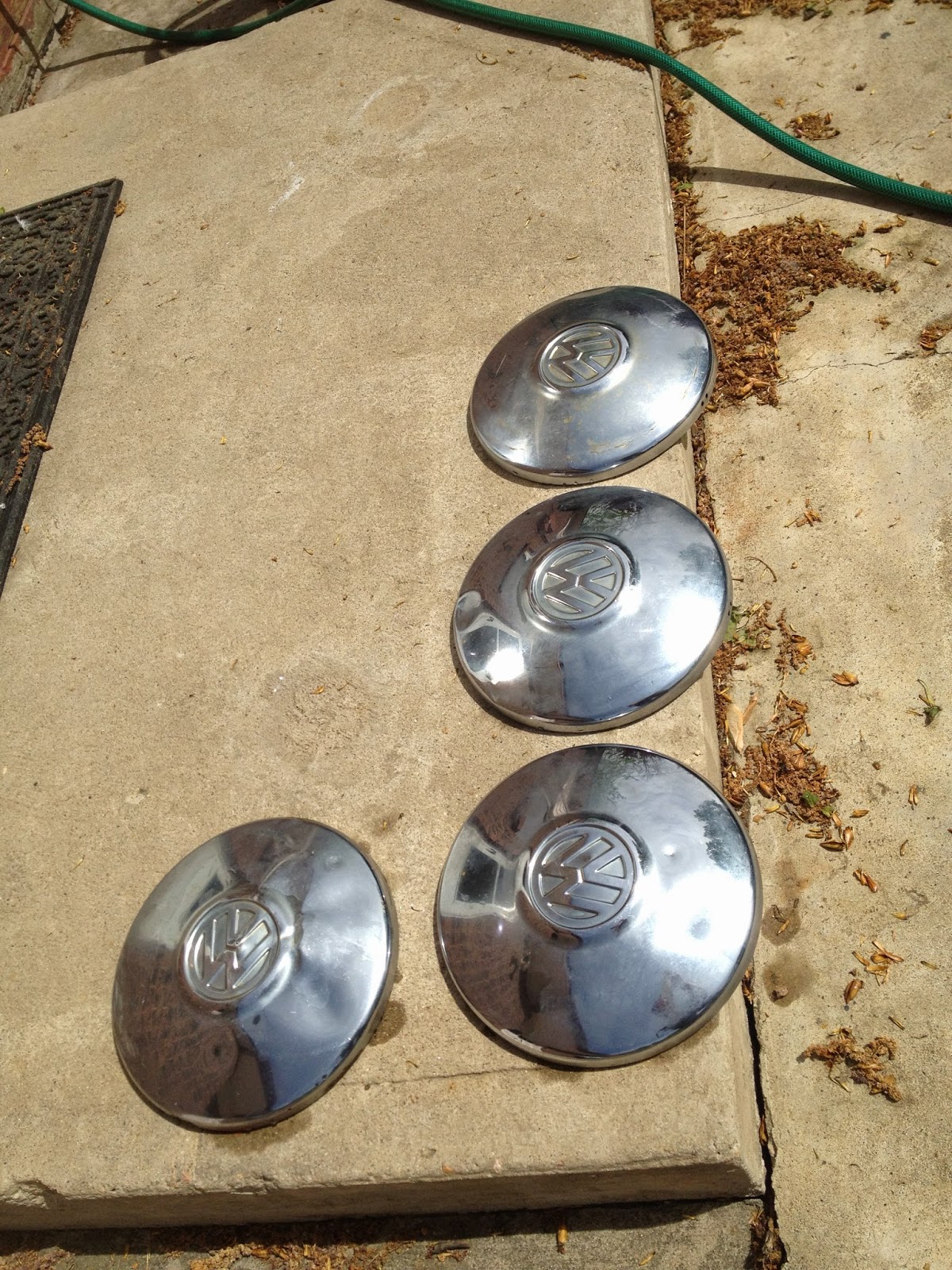 The wheels themselves were a bit of a cheat. I’d had a heck of a time cutting the radius for the “wheel wells” in the plywood, and had my doubts about cutting a perfect circle four times. When I found the big box store sold plywood circles exactly the size I wanted, it was a no-brainer and I bought four.

I’d bought some rubber plasti-dip kind of stuff I thought would make the wheels rubbery; it didn’t, at least in the quantities I was willing to mess with. In hindsight, black paint would’ve worked just as well (and looked about the same). But when bolted to the frame they turned out like this: 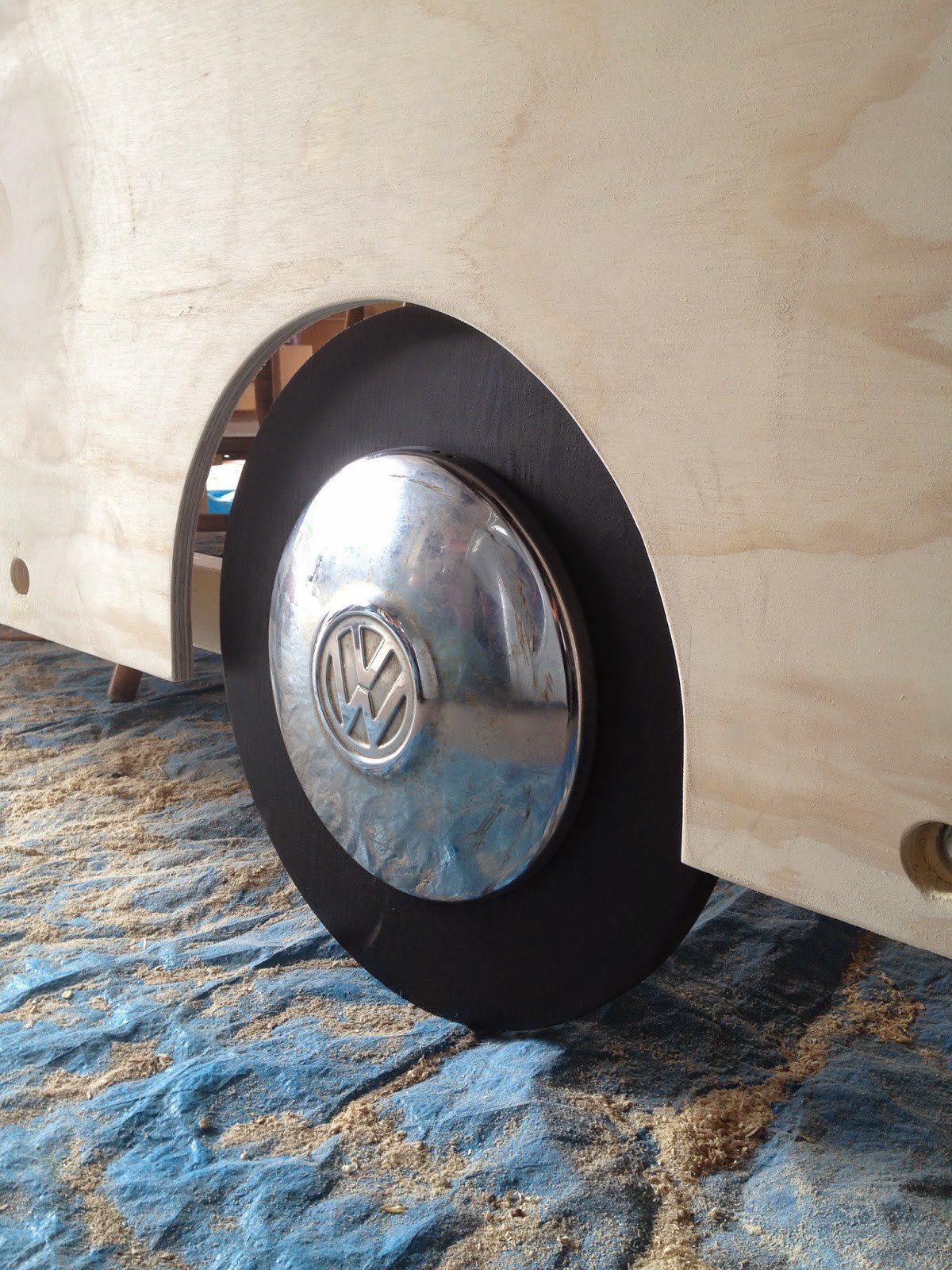 I was able to make all the wheels, try them out, and remove them to continue working on the VW bus bed itself. I also cut a couple of trim pieces to cover up gaps in the side left over from my bulging on the front bumper box cover; it looked pretty darned good. Next up would be some painting! 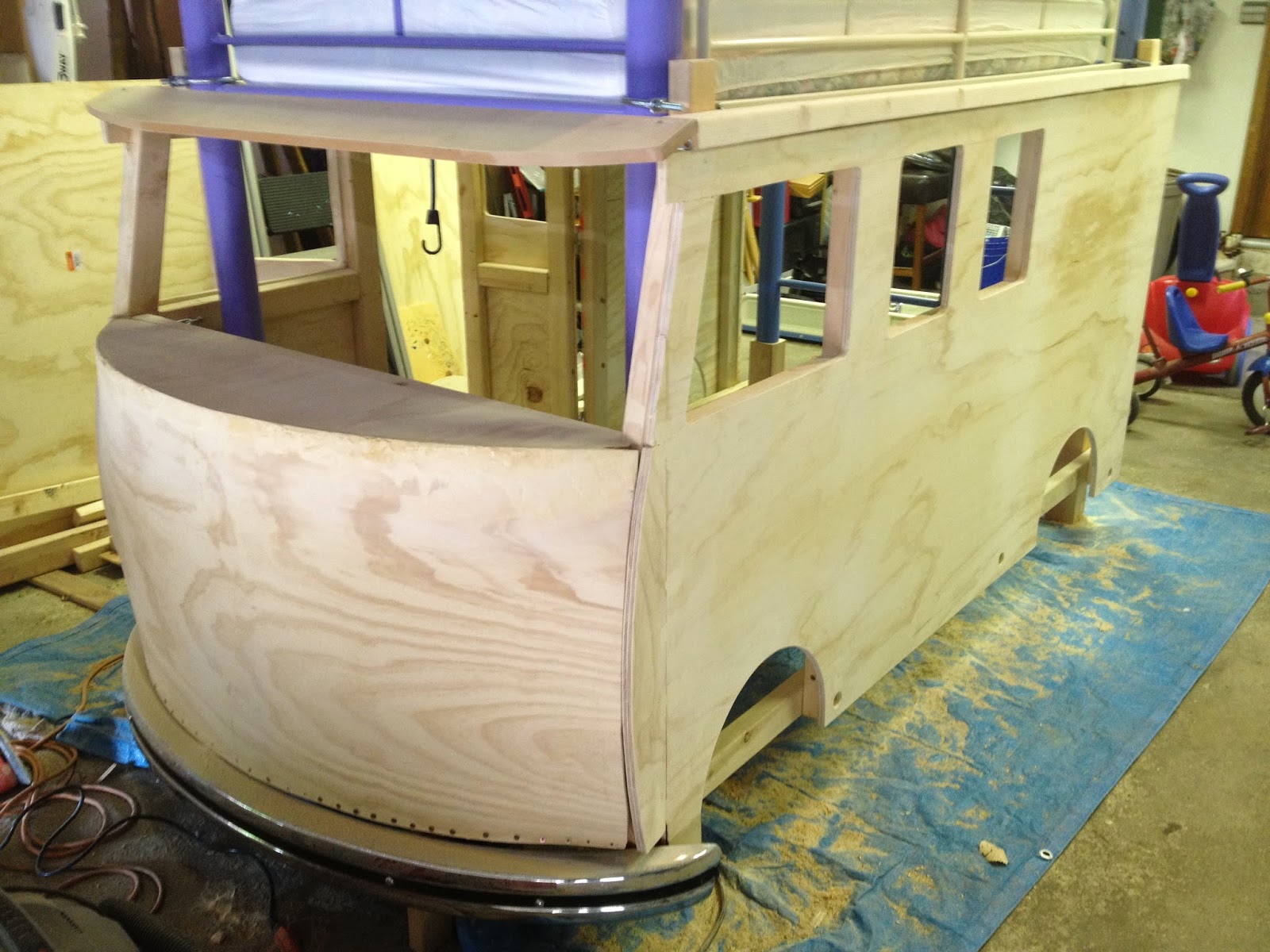